The first items that B2B marketers would consider cutting if asked to reduce their budget were print advertising and tradeshows (14% each), followed by advertising in general (12%) and direct mail at 8% (responses were open-ended), according to the "B-to-B Marketing in 2008: Trends in Strategies and Spending" study by MarketingProfs.

Also according to the same study: "Of those currently using each tactic, Online Video and Search Marketing budgets are expected to grow by a majority of respondents, with more traditional tactics (e.g., broadcast and print advertising, direct mail and tradeshows) expected to decline by 20% or more. Online Video and Search Marketing are expected to show the greatest increases (55-56% each) in 2008. Also, over half of respondents intend to increase spending on other Web 2.0 media (52%) and Webinars (51%)."

This paints a doom-and-gloom picture for marketing print collateral and augurs a huge surge in digital spending.

Other research reinforces the forecast of growth for digital marketing. According to an August 2008 forecast by eMarketer, despite the economic malaise "Internet advertising [spending] is expected to continue growing in the double digits for the next few years," as follows:

In addition, Internet marketing spending growth in the next 12 months will far outweigh traditional advertising spending, according to "The CMO Survey," conducted by Duke University's Fuqua School of Business and commissioned by the American Marketing Association (September 12, 2008).

So, why focus on print collateral at all?

Is print a dying marketing breed? Let's take a close look at three reasons why, despite falling confidence, print collateral may still be viable and relevant.

Reason No. 1: Not everyone has access to, or uses, the Internet

Did you know that about one-quarter of Americans have no Internet access? That's according to a 2008 report titled "Information Searches That Solve Problems: How People Use the Internet, Libraries and Government Agencies When They Need Help" by the Pew Internet & American Life Project and the Graduate School of Library and Information Science at the University of Illinois at Champaign-Urbana. The study found that those with limited access, or no access to the Internet, tend to be older, less affluent, and less well educated.

Also, a 2008 Parks Associates study found that over 20% of Americans had never even looked up a Web site or sent or received emails. Surprised? 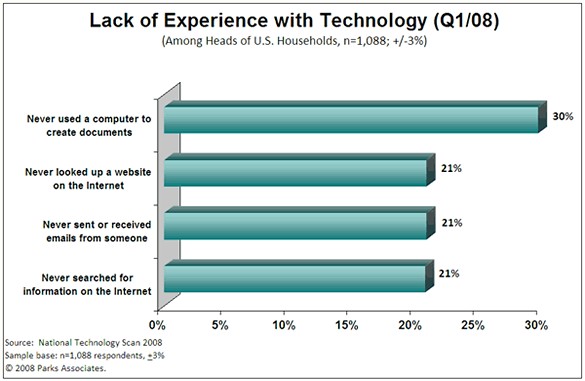 North of the 49th parallel, Canada's online population comes in at a high 84+% of its population using the Internet; yet, comparatively, Europeans, have considerably fewer users than North Americans. Over half of Europeans do not use the Internet at all. 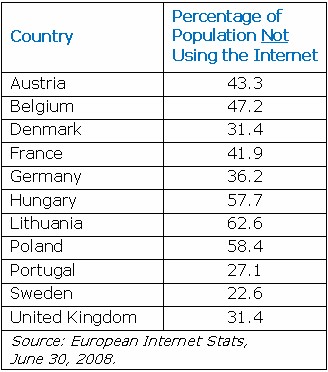 And although some Asian countries score higher in Internet use (Hong Kong, Japan, South Korea, and Taiwan), the overall number of Asians not using the Internet is almost 85%!

Therefore, if your company or organization targets European or Asian markets, or older, less affluent and less-educated Americans, digital marketing may not be the channel of choice. Old-fashioned print collateral may still have cachet for these market segments.

Even though email marketing is less expensive than print marcom, a 2008 Forrester Research study finds that spam now accounts for 90-95% of all sent emails. It's true that good sender practices can improve these odds, but in reality complaint rates higher than just one-tenth of one percent can still get your messages blocked at major ISPs.

Other research shows that some segments still prefer print marketing to digital. A 2007 Vertis Communications study showed that 85% of women between the ages of 25 and 44 read direct marketing pieces, while 53% (who have access to email) read email marketing messages. Hispanic consumers also responded to direct mail in increasing numbers, jumping from 38% in 2003 to 54% in 2007.

In addition, 73% of respondents in a 2007 survey by International Communications Research and reported by Pitney Bowes prefer to receive product announcements—from companies with which they are already in contact—via [snail] mail as opposed to 18% who prefer to receive them via email. (It's true that Pitney Bowes has a vested interest in regular mail, but the statistics are impressive nonetheless.)

From this, we can conclude that if you target women age 25-44 or Hispanics, print collateral may get your marketing messages through over digital options.

When people access information over the Internet, many will print out lengthy or difficult reading material presented on their computer screens "so they can read it" or so that they can "understand it." That is because computer screens cause a "flicker" effect, making it more difficult for the brain to process information compared with print sources. We also read online text 25% more slowly than text on paper.

Another factor to consider is that many Web sites are not W3C compliant (World Wide Web Consortium)—the international consortium that develops Web standards to improve the experience of users everywhere, including people with disabilities. Sites developed without using W3C guidelines means that people with certain disabilities must rely on adaptive technology to access screen information. Without it, reading online can be challenging, if not impossible.

Therefore, if the marketing messages you want to impart to your audience require detailed explanation, or they are educational or technical in nature, or they target people with certain disabilities, print collateral may still be your best bet.

Even though digital marketing is growing with a vengeance, print collateral can still hold its place in an integrated marketing communications mix, at least for now. Of course, doing due diligence and conducting research with your particular segments is the ideal way to learn what they actually prefer.

In the meantime, it will be interesting to see whether print-based marketing will hold share as younger Millennials, with their strong digital preferences and practices, become working adults.

Elaine Fogel is president and CMO of Solutions Marketing & Consulting LLC, and a marketing and branding thought leader, speaker, writer, and MarketingProfs contributor. She is the author of the Beyond Your Logo: 7 Brand Ideas That Matter Most for Small Business Success.