Video Viewing Down 13% in Feb.

Some 28.1 billion videos were delivered to US Internet users in February 2010, down 13.2% from 32.4 billion in January, and 174.2 million people watched online videos in during the month, slightly more than the previous month's 173.4 million, according to comScore data.

Some 83.1% of the total US Internet audience viewed online video in February, and viewers watched an average of 161 videos during the month.

Hulu video viewers watched a record 2.4 hours of video per person during February, up 120% from a year earlier. Moreover, Hulu viewers each watched, on average, 23.3 videos during the month—an all-time high for the property.

Google maintained its position as the highest-ranked video property, delivering 11.9 billion videos and accounting for 42.5% of videos viewed. YouTube accounted for more than 99% of all videos viewed at Google sites. 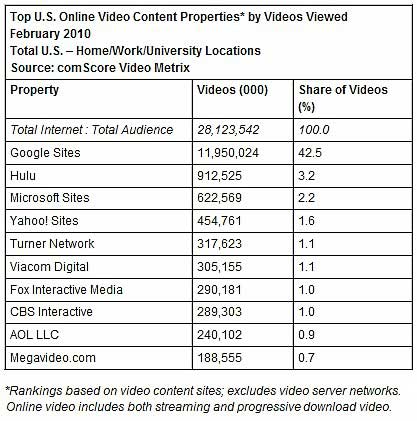 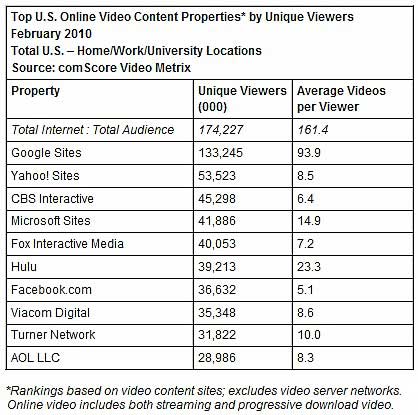 The average duration of online videos in February was 4.3 minutes.

Ranked by potential reach, Tremor Media was the nation's top video ad network, with a potential reach of 81.7 million viewers—46.9% of the viewing audience.

The top video ad networks in terms of their actual reach delivered were Joost Video Network (by Adconion Media Group) with 38.3% penetration of online video viewers, BBE with 18.3%, and BrightRoll Video Network with 18.1%.