How Text Messaging Can Drive App Engagement and Revenues

One of the toughest marketing jobs today is working for an app developer. With app downloads projected to surpass 66 billion by 2016 (more than double the 31 billion apps installed in 2011), more often than not marketers are targeting smartphone users, who are expected to drive the majority of mobile downloads.

The bad news: the vast majority (68%) of smartphone users open only five or fewer apps at least once a week. So, what's a marketer to do?

Text messaging is one of the most effective direct marketing channels to attract new users as well as to increase engagement with existing customers, according to a recent study by Peggy Anne Salz, editor of MobileGroove.

SMS is especially important for marketers who use a freemium model—for which engagement is critical—to monetize their apps. Their business—making money via in-app purchases—relies on how well they can keep customers coming back to purchase more features, levels or other functionality they find valuable.

Despite the increasing availability of mobile chat or instant message applications, text messaging remains the primary mode of communication. More important, people equate messages on their phone with having "an actual conversation." 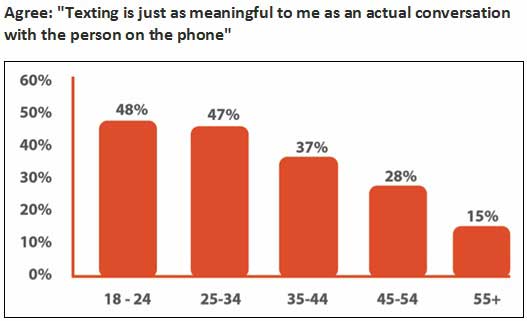 That's a clear signal both to marketers and to mobile app developers that SMS messaging has the power to reach, engage, and influence people.

Here are a couple of examples of how that's possible.

One example of the power of text messaging is BLUE LION mobile, the German maker of an app called Qeep, one of the world's largest mobile social discovery platforms, with more than 16 million users in over 200 countries.

BLUE LION uses text messaging to reach and retain high-value Qeep users. It has developed a detailed process based on SMS to reactivate app users who haven't accessed their app for days or weeks, and to bring them back into the community. Those targeted campaigns achieve an impressive response rate of above 10%.

In addition, the company uses text to power "invite-a-friend" campaigns. Users invite other users to try out the app also via texting—generating a conversion rate of 50% and an activation rate of another 10%. 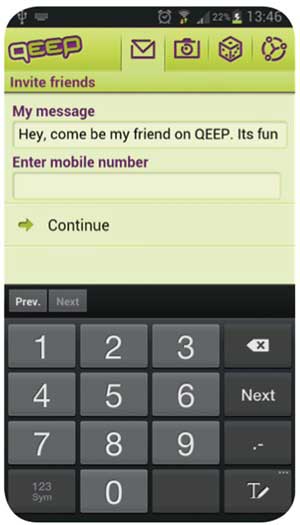 The reason Qeep bases its engagement strategy on SMS? Because text messaging is a ubiquitous technology, among all mobile operators globally. Such expansive reach provides an app marketer with global scale and the ability to ensure consistency across markets, driving increased engagement at lower cost and reduced complexity.

Text messaging is also key because, unlike in-app notifications, marketers can use SMS to reach people who don't have their app open on the device or who have deleted the app altogether.

GET IT: SMS for App Distribution

GET IT Mobile provides a platform for delivering mobile apps from any marketing channel to any mobile device. The Silicon Valley-based company uses text messaging to activate users and control the experience end-to-end.

GET IT's technology enables a one-click or one-text call to action that makes it simple for users to download the apps they want. App developers use the platform to send a download link to the user's mobile phone via SMS, taking the friction and confusion out of the process.

Asking consumers to download an app from the app store is like sending them into the lion's den. Marketers relinquish control and must compete with apps clamoring for consumer's attention. Using SMS guarantees consumers will download the correct app, and not a similar product from a competitor.

Communicate, Connect, and Curate: How to encourage mobile app downloads and engagement

Text messaging can also be used to enable and monetize conversations between community members, and it provides ways to deliver a valuable feedback channel.

Qeep's invite-a-friend process, for example, is an instance of how users can help create and build a community. Consumers can play an important role in helping apps establish an engaged audience, as new users are more likely to consider word-of-mouth recommendations.

Until now, app success has been all about driving new downloads and competing on price. Today, the market is dominated by freemium models. In this environment, the focus is not just on grabbing consumers' interest in the short term but on getting them engaged and keeping them re-engaged. SMS is proving to be a vital solution for that particular marketing problem.

Thorsten Trapp is a co-founder and the CTO of tyntec, which he founded in 2002 with Dr. Ralph Eric Kunz. Thorsten developed tyntec's mobile messaging platform architecture, and he is responsible for the company's technical innovations and intellectual property.