How Content Marketing Took the World to the Moon, and What It Teaches Us Today

It's easy to consider the story about the Apollo moon landing with a sense of nostalgia for a bygone era. But what's most interesting about the story is its surprising relevance for today's marketers. Here, our friend David Meerman Scott explains why, and he offers up a compelling look at how Apollo was arguably the first major real-time content marketing effort broadcast to a global, engaged audience. —Ann Handley

Many marketers are over the moon about the "new" concept of content marketing (sometimes called "brand journalism"). As they should be! Content is great for SEO, it serves as fodder for sharing on social networks.

As MarketingProfs's own Ann Handley wrote in her book, Content Rules (which she wrote with C.C. Chapman, and for which I wrote the foreword), "Content positions you as an expert people will want to do business with."

While everybody was looking for the next big thing in content, I found inspiration by going back half a century.

With all the recent hoopla, few people realize that content marketing has been around for more than 50 years. In fact, the greatest story never told (until now) about content as a marketing tool is that it helped to deliver humans to the moon in the late 1960s and early 1970s. That fascinating story is perhaps the greatest marketing case study in human history, and it is the subject of my new book, releasing this week: Marketing the Moon: The Selling of the Apollo Lunar Program.

I wrote Marketing the Moon with Richard Jurek, president of Inland Marketing & Communications. Like me, Rich is a lifelong space enthusiast and a collector of historic space artifacts from the Apollo program. Captain Eugene A. Cernan wrote the foreward to Marketing the Moon. Flying to the Moon not once, but twice, Captain Cernan also holds the distinction of being the second American to walk in space and the last man to have left his footprints on the lunar surface. (Documentary film rights to Marketing the Moon are being optioned by Robert Stone Productions. Robert has had four films premiered at Sundance and an Academy Award nomination for Radio Bikini as best documentary film.)

It's been a blast to dig into marketing history by speaking with half the men who walked on the moon, NASA public affairs staff, the PR people from contractors like Boeing and Raytheon, and journalists from publications like The New York Post and Reuters—part of the hundreds and thousands of unsung participants from the golden age of spaceflight.

In a lengthy 1959 policy memo, Walter T. Bonney, the head of NASA's nascent Public Information Office (PIO), laid out a vision for NASA's content marketing approach to PR. "In practice, PIO staff work as reporters within the agency, seeking out newsworthy information from NASA technical personnel and processing it into a form useful to the press. The press uses this product of the PIO—the releases, the pictures—much as it uses the product of the wire services, with this important difference: It rewrites the product of the PIO and in the doing, makes the product its own."

To support his vision of a NASA public affairs group operating not as pitchmen but as reporters, Bonney, a former journalist, actively sought and recruited staff with print and broadcast media experience. Among those Bonney enlisted during the early days of the agency were Paul Haney and Jack King, who would soon play key roles during the Apollo program. "The core contingent of NASA Public Affairs people—just about all of us—were ex-newsmen," King told us in a lengthy interview. "We were good writers, and we knew the news business. That made a major difference in the whole operation."

That content output helped to feed a world hungry for information about America's space efforts; and the world's press outlets, clamoring for content to serve up to their audiences were more than receptive.

Content was not merely king during Apollo: It was one of the earliest successful brand journalism campaigns in history.

The Whole World Is Watching: Live TV on Apollo

Ask anybody over the age of around 50 about the moon, and, like me, they'll talk about the amazing live television broadcasts from the lunar surface. I was eight years old when Neil Armstrong and Buzz Aldrin landed their lunar module Eagle on the moon on July 21, 1969. I remember, when subsequent missions occurred during the school day, televisions were wheeled into my elementary school classroom so we could watch liftoffs, lunar "extra-vehicular activity" (EVA, or moonwalks), and splashdowns.

Live television from the moon, conceived and developed by NASA in partnership with many contractors, such as Westinghouse and RCA, was the ultimate in content marketing. What better way to showcase what your organization is up to than providing live, real-time video footage that any television station could broadcast at no charge?

As important as all the live television transmissions were to the American people who footed the bill for Apollo, they almost didn't happen. Live television transmissions were not in the original plans for Apollo. Many administrators at NASA said television was unnecessary. Engineers argued that live video was a waste of valuable resources. And most of the original astronauts and their bosses insisted that operating television cameras would detract from the important work of the mission. Television made it on board the Apollo missions only as a result of the efforts of a small group of NASA visionaries, dedicated teams of engineers, and years of persistence.

It reminds me a great deal about how marketers today must push reluctant corporate executives to allow the use of social networks, such as Twitter and Facebook, at work. The entrenched old guard hates change and fears new technology, while others see the benefit in new ways to communicate.

Scheer took his case directly to the engineers. "Weight was a critical issue, no question about it," he said. "But I insisted, 'You're going to have to take something else off. That camera is going to be on that spacecraft.'" In response, the engineers fought back. "'No, no, you don't understand. It'll interfere with flight qualifications.'" Scheer recalled their insistence, '"Our job is to get the astronauts to the Moon and back safely, and bring a [soil] sample back—not to appear on television.'"

Among the astronauts, Tom Stafford, a member of the second group and a veteran of two Gemini flights, voiced his disagreement with Gordon Cooper and many of the original Mercury 7. "One thing that always surprised me about Deke Slayton and most of the Mercury astronauts was their indifference—or animosity—toward the public affairs side of the manned space program," Stafford wrote some years later.

In his position as head of mission planning for the Apollo astronaut group, Stafford became a major advocate for live television. "It was clear to me that the American public was paying for Apollo and deserved as much access as it could get. They should see the wonders we saw. Hasselblad photos and 8mm [sic] movies were great, but nobody saw them until after a mission was over. What better way to take viewers along to the Moon than by using color television?"

Kraft and Stafford, together with Scheer and the others on the Public Affairs team, fought years of resistance. "I even got a note from Deke Slayton that said, 'We're not performers, we're flyers,'" said Scheer. "They could never see the big picture. But they weren't landing on the Moon without that [TV] camera on board. I was going to make sure of that. One thing I kept emphasizing was, 'We're not the Soviets. Let's do this thing the American way.'"

There's no doubt that live television from the moon is one of the most memorable human legacies of the twentieth century. It is an epic story of visionaries struggling against entrenched notions of access and information distribution.

Conceived and paid for by an organization, NASA, to educate and inform its publics—both the American people, who were paying for the program, and the rest of the world's population, who were in awe of America's technical prowess—the Apollo content program is a fascinating business case study that teaches modern marketers a great deal.

You're not the first marketer to struggle with content creation, audience development, and skeptical bosses. We all have a lot to learn from the marketing and PR pioneers of America's space program of 50 years ago. 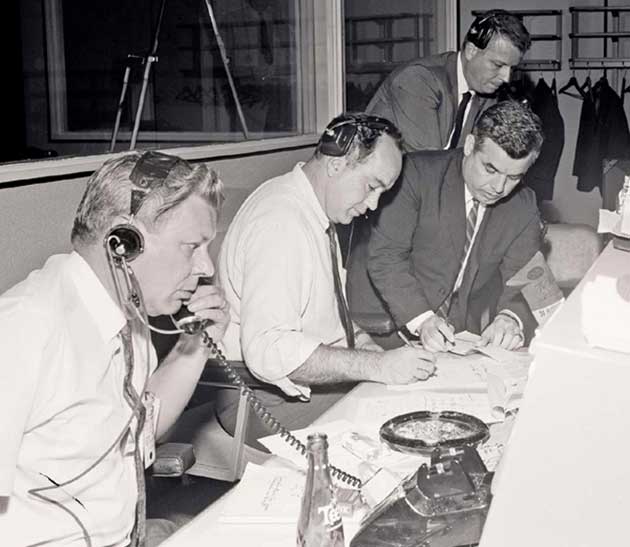 Continue reading "How Content Marketing Took the World to the Moon, and What It Teaches Us Today" ... Read the full article

David Meerman Scott, B2B marketing powerhouse and fandom strategist, spotted the real-time marketing revolution in its infancy and wrote five books about it including The New Rules of Marketing and PR, with more than 400,000 copies sold in English and available in 29 languages.

Now, David says the pendulum has swung too far in the direction of superficial online communications. Tech-weary and bot-wary people are hungry for true human connection. Organizations have learned to win by developing what David calls a "Fanocracy"—tapping into the mindset that relationships with customers are more important than the products they sell to them.

Prior to starting his own business, he was vice president of marketing for several publicly traded B2B technology and information companies.