"King James" as he's called by the media is one of the greatest players of all time, and there's a method behind his madness. When his natural ability reaches its limit, LeBron continues to improve, using a few simple but effective life principles that can be directly applied to your marketing efforts.

1. Have a practice schedule (and stick to it)

Not every day is great. Sometimes, we wake up and don't feel the motivation to get work done. But a schedule will help ensure that even on those days what needs to get done gets done. Having a schedule and sticking to it actually makes us feel good because checking things off of a to-do list releases serotonin—a chemical stimulant produced by our bodies.

In 2010, Lebron James was already established as force in the league, but he had a problem shooting three pointers: Just 33% of his long-range shots were going in. Knowing an improvement had to be made; he hit the gym—hard. Increasing his daily shooting dramatically and jacking up hundreds of threes every day, he stuck with an intense shooting schedule for two years as the results trickled in... slowly.

To follow LeBron's method for improvement with your marketing, set up a calendar and make sure every member of your team is involved with the schedule. (You can try using CoSchedule or a similar tool) Just as with LeBron's practice schedule, there's a drastic difference between marketing routinely versus sporadically, the following chart shows just how big that difference is. 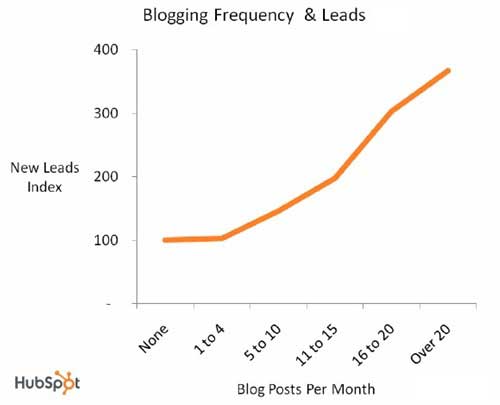 2. Have a short memory

Start fresh every single morning, and don't let any level of success go to your head. "It's very easy to do that, especially in our league, because you're paid so much money." James told Men's Health magazine. "Those mornings I say to myself, A lot of people do that. But the ones who say 'I don't feel like doing it' and still go do it become the best. I want to be the best, so I go out and do the work. It's a responsibility. I have my name to uphold."

Whether your marketing is going well and you feel like an all-star marketer, or your marketing is faltering and you feel as if you're treading water, there's a temptation to get stagnant and falter from your schedule. But remember that you have a name to uphold and there are a thousand other marketers who would love to steal your customer base away.

3. Don't give in to distractions

"I laugh and joke, but I don't get distracted very easily," Lebron told Men's Health. Nothing kills progress like distractions. The ability to "plug in" and pound out work is a trait of the successful.

(Monitor your distractions using RescueTime, which will keep track of how much of your time is productive, and FocusBooster, which will block out 25-minute segments for hyper-productivity.)

LeBron James's goal in life has been to be the greatest basketball player he can possibly be. That doesn't mean he's ignored how to be a networker. Lebron understands the importance of networking and takes advantage of it.

"Basketball was my life—I just wanted to play and make a career," he told Men's Health. "It was never like I went to work every day and said, 'Hey, I'm going to use this to make other business opportunities.' But now that they've come, I've embraced them."

What opportunities have you ignored? Squandered?

Every day there are opportunities for creating lasting connections if we'd only slow down and take time to explore them. Pursue new partnerships for your business in verticals that aren't traditional; think outside the box. Try keeping an "interesting people fund," money set aside specifically to be spent on expanding your network. Use it to take people to lunch or build out a partnership just for the fun of it.

"In our sport, if you don't have your teammates, you don't have anything," James says. Marketing isn't basketball (unfortunately), but the same principle applies. The best ideas and greatest accomplishments are often the result of many smart people working together. Use your skills to improve the people you work with.

In game seven of the 2013 Eastern Conference finals, LeBron James offered to take his teammate Dwayne Wade's place guarding the opponent's best player, Paul George. Essentially, LeBron was taking on a tougher role in the game so Dwayne Wade would be freed up to score more points. James was putting his own ego aside to help his teammate be better. The result? A decisive victory and, eventually, an NBA finals win.

In your marketing team, people have projects they are best at. Make it your job to keep each member on the tasks that are best suited to their strengths. If there is an impediment, a "defender" that is preventing optimal work, take it on yourself.

(A practical way to discover what each member is best at is to take a Myers-Briggs personality test and compare your strengths within the team. If you're a team of one, take the test to better understand where you can personally excel.)

If LeBron James lives up to his own expectations to be one of the greatest basketball players of all time, it'll be for good reason. He has set up a system for improving himself that's taken his natural talent and propelled his career into stuff of legend. Take a page from his book and watch your marketing efforts reach new heights.