Reviews and rankings work as social proof for potential users, telling them that the app has value, offers some kind of benefit to the user, and is worth installing. Fully 98% of the top free apps have at least 4 star ratings, according to an Apptentive study.

Most apps in the US App Store don't have reviews, so obtaining reviews will help you increase your app's discoverability and organic traffic. Moreover, positive ratings and reviews have a significant positive effect on app store rankings, studies prove.

Rating or review prompts (in-app messages that ask users to rate a particular app) are a highly effective method for gaining reviews. They are also proven as an effective tool for increasing the number of positive reviews and ratings.

When asking for in-app reviews, you need to pay particular attention to how you ask for a review.

Bad timing, intrusive forms, or inappropriate messaging will motivate users to leave a one-star or other low rating; "you annoyed me with a review prompt, so I am going to punish you for a bad experience," many users will think. Consider the example of a store clerk who continually hounds customers, desperately asking whether they like shopping in their store.

We all want to feel invited to leave feedback—as opposed to being pestered for it.

At app marketing agency ComboApp, we help app owners build marketing strategies and set up intelligent review prompts that drive positive results. Based on our experience, in this article I share do's and don'ts of how to ask users to review your app.

Identify moments of engagement in the user's experience when he or she has finished some sort of enjoyable action (game level, product purchase, sharing a video, etc.). By successfully identifying when he or she is satisfied, happy, or excited, you will optimize your chances of receiving a positive review.

When choosing the right timing to send a prompt, you reduce the possibility of receiving a negative review or one-star rating. And prompts won't be annoying: They won't interrupt the user, and—most important—the user will have had a positive experience from using the app by the time he or she sees the request. 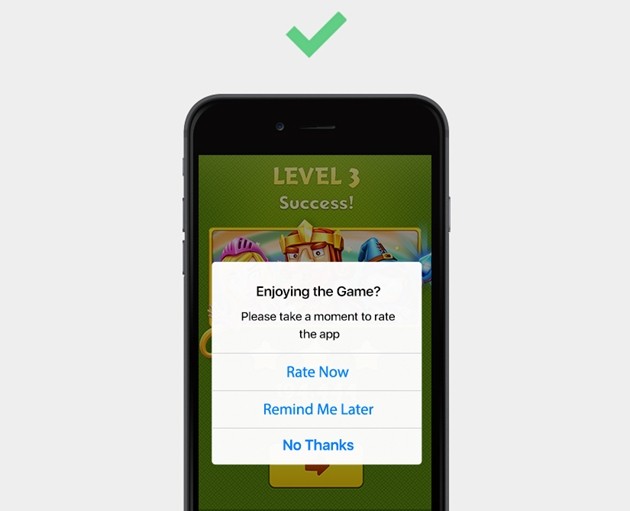 2. Make it relevant and client-oriented

Users like to think that app owners truly do care about their opinion and value user feedback. But if you show the prompt with a direct rating request, without first connecting with the user, it implies that all you are looking for is some positive press and shameless self-promotion.

Instead, try building rapport and establish a relationship. First ask users whether they are happy with the app; doing so will show that you care about how they feel and that you are willing to make it better (see "Do No. 3," below).

Starting a conversation with "Are you happy with the app?" is 5-10 times more effective than just asking for a simple rating. 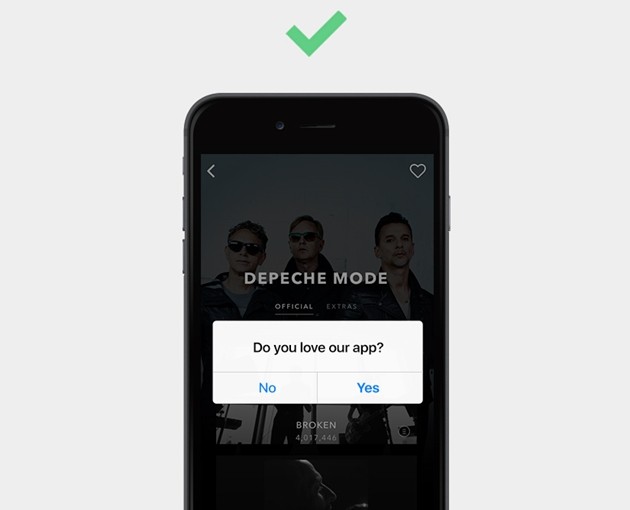 When users are given choice of what action to take, they are more likely to stay in the app and proceed with a review. If a user sees no relevant options, he/she will most likely abandon their review.

As noted earlier, starting with the "Are you happy with the app?" question has become the new must-have review prompt etiquette. If a user chooses "Yes," he/she will be sent to the app store page for the app review. If the user selects "No," the user will be taken to the in-app feedback form.

Happy customers are sent to the review page, and unhappy customers get a chance to share their dissatisfaction through a direct line of communication.

This approach has been proven to lead to increased positive app rankings, simultaneously building customer loyalty and support. 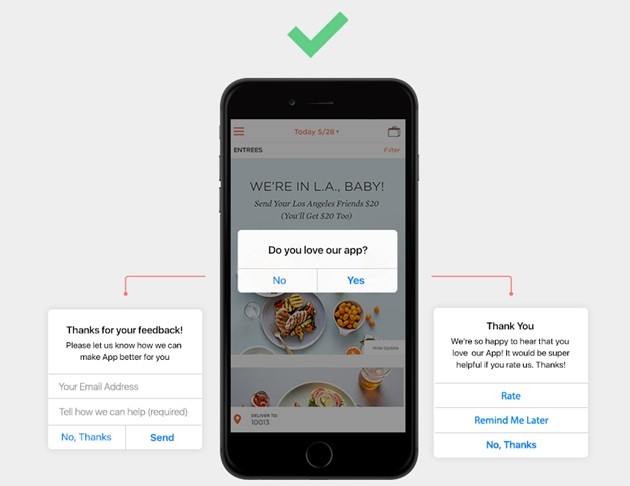 Finally, always offer a "No, Thanks" or "Remind me later" option in case you've reached a user at an inopportune time.

4. Start a dialog with the user

Use your prompts as a way to collect user feedback and make adjustments accordingly.

First of all, minimize negative reviews by enabling an in-app feedback form for those users who are unhappy with the app. Users will be able to send complaints, problems, and bugs directly to the app owner rather than publishing them on the app store page. It is crucial to answer all complaints in a timely and transparent way so that you increase retention rates.

Second, don't ignore negative reviews on the app store page. Comment on each one and use them as your most relevant source for potential fixes and improvements of your app. You can also send pushes about bug fixes to those users who sent feature and improvement suggestions. 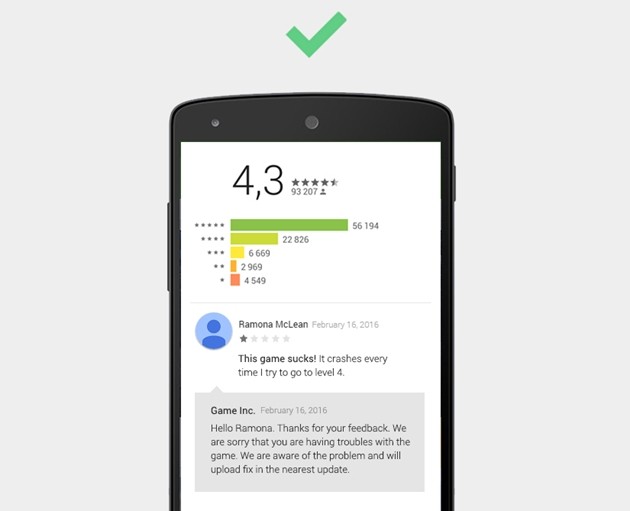 Review prompts shouldn't look like you are asking users for a favor. It should be a form of trusted communication between user and the app owner.

The worst thing you can do with a review prompt is to ask for a 5-star rating. Though tempting, doing so will lead to getting your app banned from the app store and can lead to lower ratings because see these requests as irritating and disingenuous. 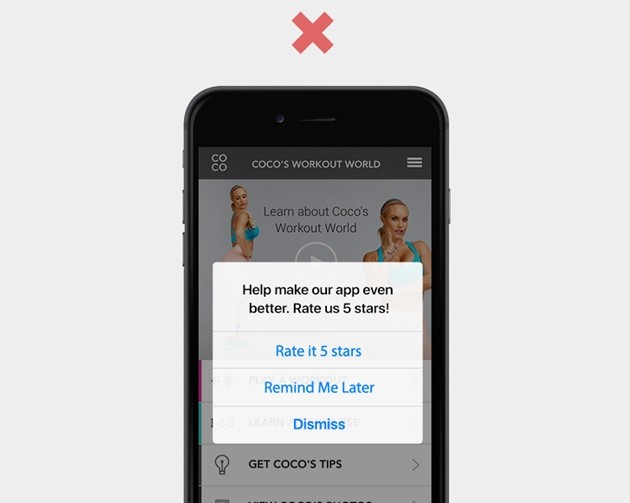 Some app developers use a shortcut to good reviews. They provide users with additional points or game currency in exchange for high ratings. Just as with 5-star rating prompts, offering users incentives can easily lead to getting your app rejected. It might bring positive results in the beginning, but it will eventually lead to your app's getting banned. 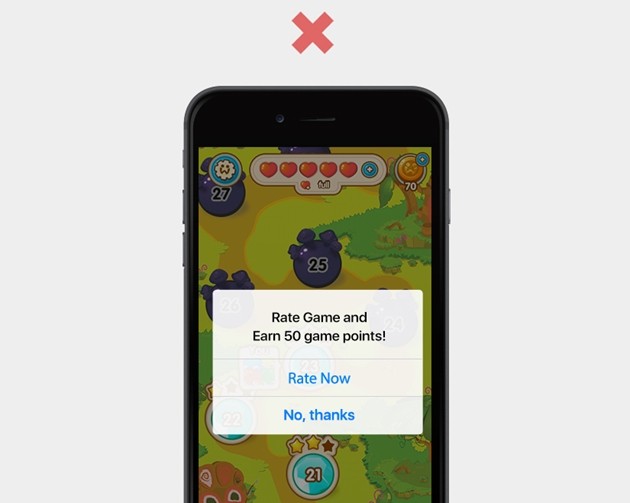 Never show a rating prompt during the app's first use. It will almost certainly result in your app's being closed. Users need some time for onboarding and getting used to using your app before it becomes appropriate to ask them for review.

Also, don't interrupt users with review prompts while they're in the middle of playing a game or completing some task within your app. It is better to a show message at the moment when your user has just completed a game level, a purchase, or an action (see Do No. 1), at a time when he or she has a natural break in attention so he or she can shift focus to your request. 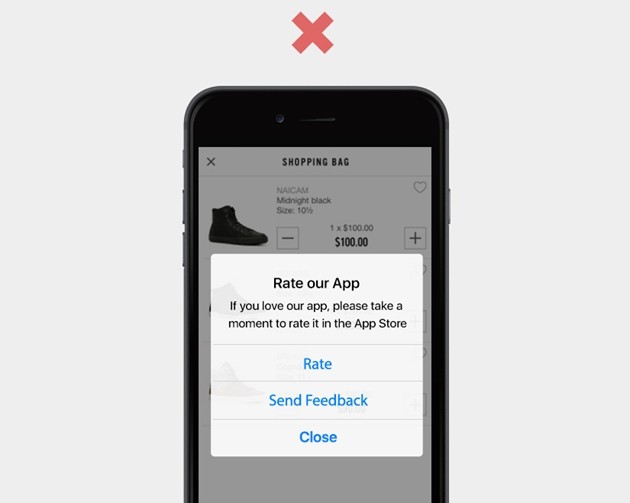 Just as with many other things in the mobile app lifecycle, review prompts are all about harmonizing communication with users. Prompts don't have to interrupt and annoy, they can be the source of unbiased feedback and opportunities for improvement.