The Marketing Impact of AI and Machine-Learning: 3 Predictions by 51 ML Marketing Executives

In the last two years, the number of machine-learning (ML) startups has skyrocketed, and companies (in truth or in hype) increasingly predicate their value proposition on artificial intelligence (AI).

Although ML and AI in healthcare and finance have garnered a tremendous amount of venture investment and press, other areas, such as marketing and business intelligence, have the potential to more quickly impact profitability, and are less fettered by regulation.

As of last year, there wasn't serious consensus or research into current and future AI marketing trends, so we decided to poll and interview over 50 ML and AI marketing executives. The goal: to determine the industries and applications with the most promise.

A Quick Intro to 'Artificial Intelligence' and 'Machine-Learning'

"Artificial intelligence" is a broad term used roughly to describe any task performed by a computer that would normally require human intelligence. This umbrella term covers everything from chess-playing computer programs to Siri to spam filters.

"Machine-learning" is the science of getting computers to learn and improve their learning over time in autonomous fashion, by feeding them data and information in the form of observations and real-world interactions.

Most of the recent buzz about artificial intelligence is due to the incredible breakthroughs in machine-learning, roughly starting with the famous Image Net image recognition competition in 2012. That year, the University of Toronto's Geoff Hinton (now also employed at Google, for good reason) and his team outperformed all pre-programmed "machine vision systems" with a simple machine-learning approach that enabled a computer to recognize images nearly as well as human beings.

1. Where AI Is Hot: Digital Media and Retail

This trend made itself clear throughout the set of responses to our survey, most notably through the executive predictions about "opportunity areas" for AI in marketing in the next five years: 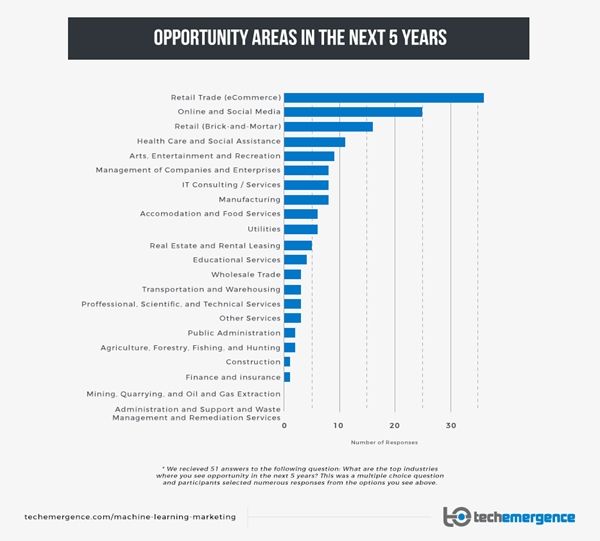 Marketing service and product companies seem to believe that opportunity lies at the intersection of transaction data and quantifiability of the customer journey. Media platforms, marketplaces, and consumer-focused online retailers were favorites among our respondents for these very reasons. The ability to scale trackable engagements, marketing activities, and sales activities into a single pool of insightful data is done best by digital entities that thrive not on handshakes and pickup trucks but on conversion rates and clickthrough rates.

"Advertisers and e-commerce businesses have the highest potential gain from machine-learning because of the ease of measurement and quick feedback needed to train and improve machine-learning algorithms." —Lisa Burton, co-founder and chief data scientist, AdMass Inc.

It's not surprising that many of the executives in our survey stated that they were explicitly aiming to sell into e-commerce and digital media companies as their ideal clients.

Though most survey respondents seemed most optimistic about online business models, B2C brick-and-mortar retail also showed up relatively high on the list of domains with opportunity. In addition to having opportunity to track a lot of transaction data (particularly for retailers that use online marketing and have many locations), main street businesses have another advantage: There's so much room for improvement. E-commerce businesses—founded on metrics and business intelligence from day one—are (not surprisingly) among the first users of AI marketing tools, because in digital media, cutting-edge tech is just table stakes. But brick-and-mortar stores that adopt cutting-edge marketing technologies will be ahead of the curve and possibly positioned for run-away successes.

Business-to-business companies and service companies (as well as heavy industry and agriculture) were viewed by most of our respondents as low-opportunity areas, primarily because of their inability to quantify and stream a sufficient amount of interaction and transaction data. A company that makes six sales a year, even if they are multimillion-dollar deals, will almost inevitably have less opportunity to train and use ML models than a company driving the same revenue with $8.00 and $50.00 purchases.

2. Advanced Recommendation and Segmentation Are Coming

While the found consensus around online search as the most profitable application of AI in marketing today, most of the respondents believe that search will be overtaken in the next five years by two more prominent applications of AI: 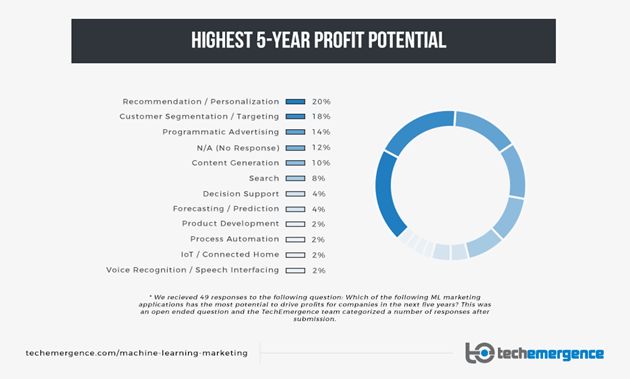 Very few of the companies polled were working on more advanced search alone. Many more were focused on recommendation technologies and segmentation technologies, with another large group focused on programmatic advertising. AI search helps users find what they want based on their commands, whereas recommendation helps users find what they want based on many more signals (including on-page behavior, historical user data, purchase history, and more). Recommendation also has the benefit of going beyond "giving people what they want," and "bending" users toward what is most likely to drive results for the company.

You may not have wanted that extra book on Amazon, and you may not know how Amazon knew you'd like it, but when you see it recommended you buy it... and cart value gets lifted just a little bit. We may not want to enter a world where users are presented with the highest-converting data-driven marketing messaging—but that seems to be where we're headed.

The tech-savvy among us take for granted that online content will eat newspapers and Netflix and its ilk will eat television, but the phaseout of "traditional media" isn't entirely here yet, and countless billions are still tied up in "dinosaur" channels. Television is by no means "dead" (even if many of us agree that it is dying), and myriad untrackable, nondigital marketing methods still dominate the spend of many international brands. As more and more people move online, and as online drives more and more efficiencies and accountability, budgets will shift, and we can imagine that adoption might follow.

Many of the companies surveyed frame their own product or service as "Advanced Analytics," but analytics alone wasn't brought up frequently as the biggest area of marketing ROI. That could be because of poor marketing and positioning efforts on the part of the companies surveyed, but it might also be an effort to appeal to what client companies want (there might be a lot of budget for "better analytics" and not so much for "cool AI segmentation stuff," so companies frame their product in the best way to get a foot in the door). We found the disconnect somewhat interesting.

3. AI in the Marketing Mainstream by the Early 2020s

Founders tend to be bullish about their own technologies. Very few Bitcoin companies will tell you that Bitcoin will never take off, and every drone company will tell you that drones will be everywhere in five years. So it came as no surprised that the executives in our survey (many of them founders or co-founders) believe that AI will become a mainstay of marketing technology in the relatively near future.

What did surprise us was how early many execs believed this adoption would happen, and their unexplained consensus around a single year for their prediction: 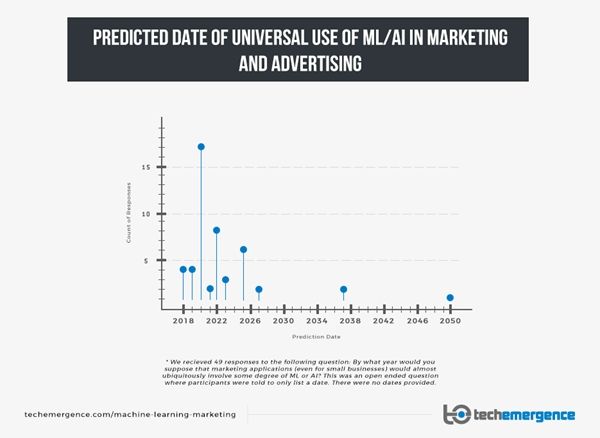 The question read: "By what year would you support that marketing applications (even for small businesses) would almost ubiquitously involve some degree of ML or AI?"

Open-ended questions about dates often start producing noticeably bell-shaped curves after 30 or 40 submissions. Here we see a bit of a bell forming in the early 2020s, with 34% of our respondents predicting that exact year. Based on some of our more detailed responses, we might suppose that the limitations in "ubiquitousness" of ML in marketing will be less about the strength of the technology and more about the abilities for companies to ingest enough data to feed the algorithms.

"I would expect that by 2023 marketing applications would ubiquitously have ML features, but that their applicability will be limited in small business because of their relative data scarcity." —Kent McCormick, senior/executive vice-president, Lattice Engines.

In addition, many executives mentioned an impending integration of marketing and CRM technology, breaking with the current frustration of the frankenstein kludge of various software tools:

"Within the next five or ten years, so let's say by 2025, we'd expect there to be wide adoption of ML/AI, as the existing CRM players build in and offer these features and the independent players increase their market share." —Brian Ferrario, vice-president, Drawbridge.

We can't be sure whether this consensus is significant, but it seems to bode well for AI's promise in marketing. As the rest of the business ecosystem (CRMs being an important mainstay) begin integrating AI, and as more and more facets of a marketing activity become digitized and trackable (including currently nonintegrated marketing activities, including phone calls/speech data, emails with clients, etc.), we can hope to see ML play a major role in marketing improvements for businesses large and small.

At some point, nearly all CRM programs were (or had the option to be) Cloud-based. At some point, all cars had anti-lock breaks. At some point, there were no startups pitching VCs who'd dare say "we don't do 'the Internet.'" It seems reasonable to believe that if ML is to create efficiencies in targeting, contacting, segmenting, and converting customers, then it, too will see its day in the form of near-total adoption.

At what point will the marketing world inexorably mesh with artificial intelligence? No one really knows, but the ride there should be interesting regardless.

Daniel Faggella is CEO and founder of both CLVboost, a marketing automation consultancy in Cambridge, MA, and Emerj, a San Franciso-based market research and discovery platform focused on artificial intelligence and machine-learning.