The goal of this two-part article series is to give digital marketers like you an idea of how the most significant changes in Google's organic and paid products will affect your strategy in 2017 and beyond. In the first article, we cover some important recent changes to Google's search algorithms.

By most estimates, Google updates its search engine algorithms up to 600 times annually. However, since the search engine giant decided to stop announcing major algorithm changes, many search engine marketers have been left speculating about their ranking changes and guessing what the future holds.

Nonetheless, Google is a generous overlord in that there are some big changes that we do know about and that we can definitely expect will affect us for the remainder of 2017.

Algorithm update Fred has been the big deal in SEO world for a couple of months now. Many webmasters saw turbulence in early March, with some sites seeing up to 90% of their keywords dropping in rank in SERPs. Gary Illyes of Google later confirmed it was a bigger than normal update, and that Fred targeted sites that were low on content and heavy on ads. Most SEOs determined the update was aimed at sites that didn't want to serve their readers useful content as much as make money off clicks.

Other than confirming that it was targeting ad-heavy sites, Google hasn't said much more about Fred. Therefore, it probably would help most webmasters to focus on their links, including how they got those links.

When building links for SEO, quality is always more important than quantity. It's better to have a few great backlinks from related, trustworthy sources than tons of links from whoever is dishing them out. If your anchor text is all keywords, Google will probably think it's part of a link scheme. People most often naturally link to anchor text that consists of business names, URLs, and product/service names.

Since Fred, Google has been making changes to the algorithms (as expected) that SEOs will have to learn to roll with and adjust to. Ultimately, Google wants marketers to focus on making users happy instead of trying to make just Google happy. If you're using the latest tactics for SEO tracking, you should see which content is performing the best and optimize content elaboration around what's working.

Mobile-first indexing, a big deal on SEOs' radar, probably won't launch this year, according to Gary Illyes. Nonetheless, it's still important to have all your Web properties optimized for mobile before mobile-first indexing hits. Google's experts rationalize that since "most people are searching on Google using a mobile device," it's time to change the algorithms to reflect that fact.

The best way to prepare for mobile-first is to ensure your site uses responsive design or dynamic serving, based on the user's device. But having a responsive site is just Step 1. Google also recommends your webmaster test the site's robots.txt to ensure that its bots can crawl the site in the first place. Finally, the official Webmaster Central Blog also recommends site owners who have verified only their desktop site in Search Console also add and verify their mobile version.

The best recommendation for those who have only a desktop site or separate mobile and desktop sites is pretty much just to create a responsive site. That way, all your content gets ranked for both desktop and mobile.

As a user, there's nothing worse than going to a site on your phone or tablet only to have a giant popup take up the whole page. What's even worse is when it's so big you can't find a way to exit out of the ad. 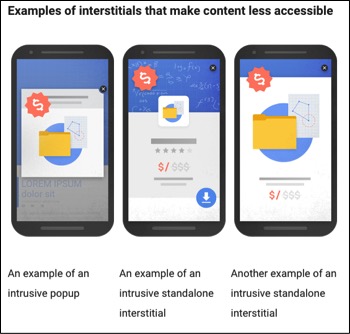 Google understands the need for ads. It sells PPC advertising, after all. But for organic search, and especially on mobile, Google knows that the user experience shouldn't be sacrificed so that your site makes money (see Fred update, above). Ads can slow down site speed; and if they block the user from your content on these smaller screens, as of January 2017 Google ranks them lower.

In essence, Google is trying to provide a better user experience and get rid of tricky "dark pattern" ads that force people to do things they don't want to, such as sign up or click an ad with no other way to exit.

Overall, the takeaway for SEOs is this: Aside from managing a technically sound Web property, you should be creating a site that's made for users. Digital marketing is just as much about pleasing the human who ends up on your site as it is pleasing the robots. Tracking leads from organic search will help you confirm what is driving your bottom line.

Carolyn is based in Atlanta, where she put a love of spreadsheets, an MBA, and years of marketing experience together when she joined CallRail's marketing team as the SEO manager in March 2017.

CallRail provides lead tracking and call analytics tools for more than 50,000 businesses across the US and Canada. Want to know where your leads are coming from and how qualified they are? Sign up for a completely free 14-day trial of CallRail's award-winning software. No credit card needed.