The abundance of new technologies and powerful opportunities in marketing can get overwhelming for a marketer. How in the world could you not feel lost in the jungle of solutions at your disposal? And if you use an agency, how can you know that it's truly benefiting your company?

Having conducted or supervised more than 900 digital campaigns, I've come across several dangerous traps that are initially hard to spot. This article will point out the four most common.

1. Don't let the CTR deceive you

One of the most frequently used indicators of the effectiveness of online advertising is the clickthrough rate (CTR), the ratio of the number of clicks on an ad to the number of views.

Imagine attractive advertising formats, beautiful graphics, and strong CTAs encouraging taking action. A customer clicks on the ad and lands on a website. But there's a problem: The page is not consistent with the creative's visual design, or the user is flooded with all kinds of information instead of with the information promised in the ad. The result: the visitor abandons the website, and the campaign results end up being far from satisfactory.

Tip: It is important to focus not only on the aesthetics of the ad's design but also on the communication and promise we use to tempt the user to enter into an interaction.

But what if I told you that sometimes a decrease in CTR is a good sign?

Consider a campaign for a financial-sector client. CTR, conversion rate, and number and cost of leads acquired through contact forms were all at very good levels. We analyzed the effectiveness of the campaign from start until the end of the conversion path—i. e., granting a loan. At the validation stage, it turned out that although quantitatively speaking it all looked great—lots of people applying—but a large proportion of loan applicants were ineligible and their applications had to be rejected.

So we tightened up the targeting of our advertisements, adding additional messages to exclude ineligible people up front. As a result, the ads were even less aesthetically appealing, but a clearer and more on-point message was created, and so people who were clicking on the ad were much more informed about what to expect. CTRs and the number of leads fell sharply, but lead quality improved several-fold.

The value of the CTR can also be overestimated because of the ad format being used:

2. Don't let details divert your attention from the real results

Very often, when analyzing the results of an online campaign we focus on a small portion of the available data and on conclusions drawn directly from an advertising campaign, but the true picture is much broader and more informative.

Conversions—the key actions that users take on the website—are divided into two categories: macro, which are the most important ones, such as the purchase of a product; and micro, which help you to determine the quality of your traffic (e. g., whether they download the brochure or subscribe to the newsletter).

It's worth checking out different models of conversion attribution and analyzing what roles various traffic sources play in the entire buying process.

For sales analysis, if the product is distributed by various sources, it might be the distributors that feel the effects of the campaign rather than the manufacturer selling via its stores or other owned channels.

An example: The promoted product's pre-sales in the producer's online store and the accompanying campaign achieved excellent results. When the product arrives at other distributors with a price lower by only a small percentage, sales in the producer's shop fell, and continued to fall, within 1-2 days. Media indicators and traffic quality remained at high levels, but conversions decreased. Tools for analyzing users' behavior on the website confirmed that users are copying the name of the product then searching for it in Google and price-comparison engines—and going on to make purchases elsewhere. Ultimately, the producer was delighted with the global sales volume. But, for example, if the product had been available from the very start in many stores and a little cheaper than in the manufacturer's shop, without looking at the total sales data the campaign would certainly have been considered ineffective.

Sometimes, the cost of obtaining the first order from a customer is much higher than the profit the initial sale generates. It is easy to fall under the illusion that an advertising campaign was unprofitable by analyzing its return on investment only through the prism of the first orders directly from the campaign. But if you also take into account rates of customer retention and maintenance, and customer lifetime value, then your results can suddenly become very attractive, proving that the campaign will pay for itself many times over.

Example: The client, a Polish travel agency, offers exotic tours to destinations such as Seychelles, Maldives, and Mauritius. The costs of acquiring traffic on its website and of getting an enquiry were very high and very often did not immediately pay for themselves. But that is just part of the story. One of the clients ordered a trip to Maldives worth 28,000 PLN (about $8,000). She was satisfied after her return and almost immediately planned another two trips with the same travel bureau, as well as recommending it to another three couples who were friends of hers. Two of those couples also decided to travel. The result: one customer generated more than $30,000 worth of trips sold.

A similar situation occurs in e-commerce. Subsequent visits and orders, purchases of accessories for already bought products, repeat purchases... all determine the eventual profit from an initial investment in advertising.

During and after larger campaigns, we notice an increased number of searches in Google, and consequently a larger number of visitors from direct and organic. The following graph shows the increase of visits from organic right from the start of the campaign. Apart from that, there were no activities in other media or increased SEO spending. In short, paid also increases organic traffic. 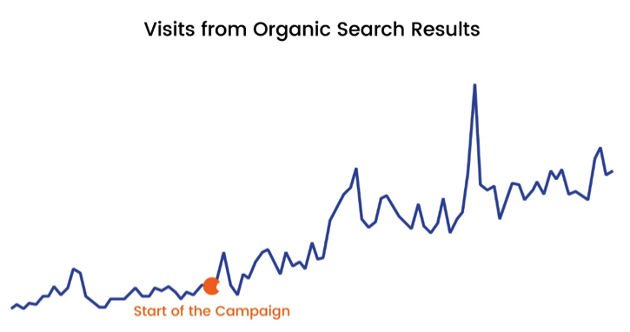 It is also worth measuring how much information about your brand and products spreads organically in forums, social media, and the Internet in general—whether there are more references to the brand, where, in what context, and whether users are starting to recommend the product themselves.

3. Don't get flattened by the flat fee

Flat fee (FF) billing seems like a permanent presence. It refers to paying publisher a fixed rate for the advertising space: For example, we order a week of our advertisement on the homepage of the website.

What traps here could you fall into?

Pay attention to the following:

Tip: It may be difficult to judge at first glance where to place an advertisement. To decide, you need to compare the available data all in one table. It should include information about the publishers, the users' profiles, and the relation between usage stats and rates. The table will help you calculate the expected cost of reaching 1000 unique users or the cost of generating 1000 views.

For this purpose, divide the net value by PV (pageviews) or UU (unique users), and multiply by 1,000 to get the CPM (cost per thousand) views or users.

4. Watch out for confusing data

The amount of data, especially in programmatic ad buying, is so large today, that it is quite a chore to choose the data worth our attention and our money.

Programmatic gives you great opportunities to target your advertising, including the following:

How do you choose the right data for your campaign?

You have to pay attention to who the data provider is and what kind of data it provides: What kind of company, whether local or international, and if the latter, does it have valuable data from your market?

Also check where and how the data is collected. Unfortunately, that information might be not so easy to obtain, but it is still worth doing research. Try asking the DSP (demand-side platform) or the data providers directly.

Another important criterion is, of course, price. You have to find a balance here: Check whether any additional few dollars per CPM will pay off through an increase in conversion rates or higher quality of traffic on the website.

Tip: The final criterion for verifying the quality and usefulness of data in your campaign is a test campaign! It's best to carry out several test runs: Try purchasing data with a similar profile, but from different suppliers, and then select the one with data that's most suitable and most cost-effective.

What impact can data selection have on the campaign?

Here is an example illustrating campaigns run for one of our customers—the same DSP platform, the same creatives used, and identical rates. Changing the data used in the campaign itself resulted in an enormous improvement in all the indicators that show the quality of traffic:

They say the devil is in the details, and that holds true especially for online campaigns. Seemingly effective solutions may prove to be ineffective in reality because superficially evaluated indicators can give you a false impression.

Before running your ad, make sure you fully understand how it will be displayed, and afterward take a look at the effects it had from various perspectives. Only when will you see what real impact it had—what it did and didn't achieve—and why.