Marketers will be shifting budgets away from traditional and toward interactive media—search, online display ads, email, social media, and mobile marketing—bringing about a decline in overall advertising budgets during the forecast period, Forrester said.

That trend is also a reflection of marketers' growing recognition of where consumers are spending their time, according to the report: "Marketers are getting better at balancing channel investments with consumer media time."

Though people typically spend equal amounts of their media time—34-35% in 2009—with television and the internet (including at work), TV ad spending is about four times that of internet ad spending (31% vs. 7%).

Search marketing spend, which at a projected $15.4 billion in 2009 accounts for the largest portion—60%—of interactive spending, will grow at a compound annual growth rate (CAGR) of 15%, reaching $31.6 in 2014, according to the research.

Display advertising, expected to constitute nearly 31% of interactive marketing spend in 2009, will more than double during the forecast period, reaching a projected $16.9 billion in 2014, holding onto its nearly 31% share of interactive spend.

Social media, accounting for just $716 million of interactive spend in 2009, will grow significantly, at a 34% CAGR, reaching more than 3.14 billion in 2014—supplanting email as the third-largest interactive marketing channel in terms of spending.

Mobile marketing spend in the next five years is expected to reach nearly $1.3 billion—or roughly equivalent to current (2009) email spending levels. It is expected to have the second-highest growth rate (a 27% CAGR) among the five major interactive channels. 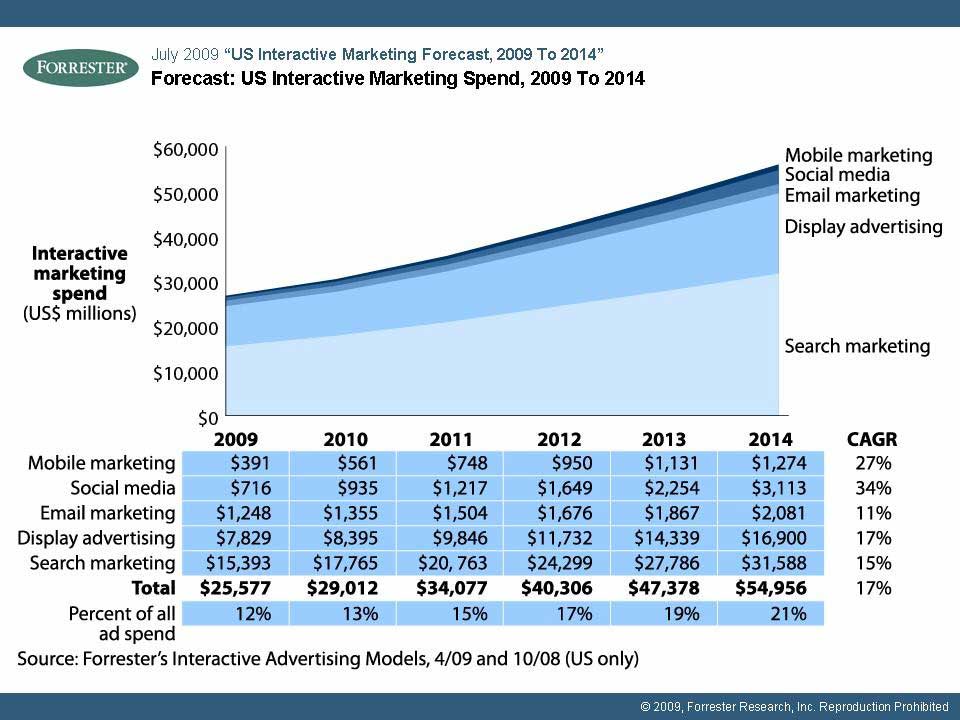 Most marketers plan to increase their interactive marketing spend—at the expense of traditional marketing budgets—according to a May blog post by Forrester analyst Shar vonBoskirk, citing Forrester's "US Interactive Marketing Forecast Online Survey" of 204 marketers, from March 2009.

Surveyed marketers were asked: "How will you fund increases in your company's interactive marketing budget?" The findings (multiple responses allowed):

Traditional marketing budgets for direct mail and print are the most likely to be shifted to traditional, according to the same survey:

"But...the most interesting takeaway from the research is that overall advertising budgets will decline.... With dollars moving out of traditional media toward less expensive and more efficient interactive tools, marketers will actually need less money to accomplish their current advertising goals," writes vonBoskirk.

"But reasonable marketers won't relinquish budget because their programs are running too efficiently. Instead, marketers will allocate unused advertising dollars into investments like innovation, research, customer service, customer experiences, and marketing-specific technology and IT staff, in order to further marketing's strategic influence within their companies."

Continue reading "$55B in Interactive Marketing Spend in 2014" ... Read the full article