Among the top 300 Web search terms, Facebook was the top-searched term overall in 2009, accounting for 0.67 percent of all searches, according to Experian Hitwise, which also found that Google has been the most-visited site of 2009.

This is the first year that Facebook has been at the top of search terms, up from the 10th spot in 2008. In addition, four variations of the term "facebook" were among the top 25 terms. 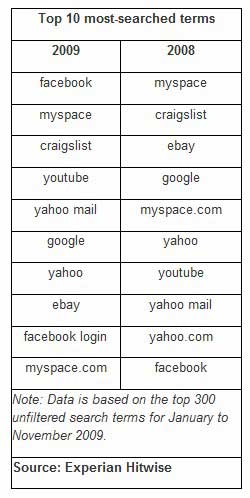 MySpace was the second most-searched term in 2009, followed by Craigslist, YouTube, and Yahoo Mail.

Overall, social networking-related terms dominated the results, accounting for 2.48% of the top 300 searches.

Adding up common properties (yahoo.com and mail.yahoo.com, for example), Yahoo properties accounted for 10.6% of all US visits in 2009, followed by Google properties (9.93%), and Facebook properties (4.26%). 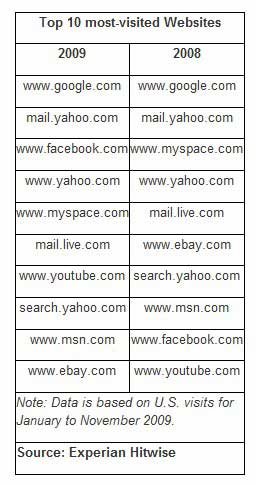 The top 50 websites accounted for 39% of all US visits between January and November 2009.