Small Business Marketing in 2010: A Forecast

Small business owners are planning to engage customers in new ways in 2010, according to an Ad-ology Research study: 28% say they will spend at least the same or more on online video, an increase of 75% over last year's plans; 25% say they will commit more resources to social media; and 21% say the same for mobile advertising.

Nearly one-half of small businesses (46%) say they do not have an active company website. Of those with active sites, the primary functions are to inform customers about products/services, provide general information, and offer special promotions.

In 2010, many small businesses plan to spend the same or more on the following online activities: 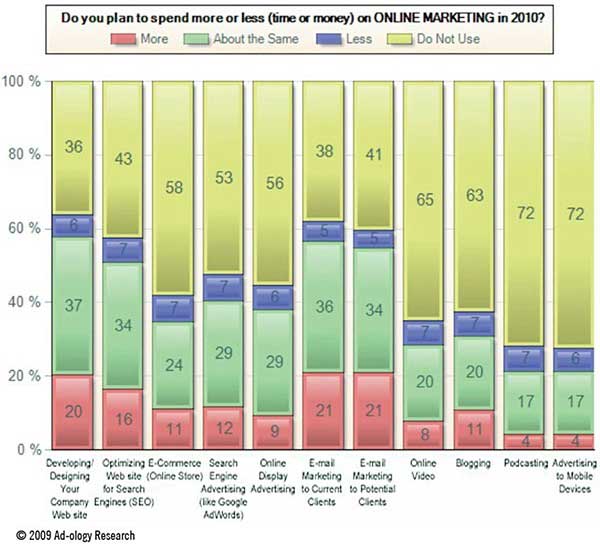 Plans for some newer online marketing methods show a notable increase over last year: 28% say they will spend more or about the same time or money on online video in 2010, an increase of 12 percentage points from last year, and 21% say the same for mobile advertising, up 10 points from the previous year.

Overall interest in using social media in 2010 is nearly the same as in 2009, as 58% agree that social media is a good way to both increase business and know what people are saying about a business. Some 46% say they wish they knew more about social media, and 27% think only young people use social media.

Small business leaders say Facebook and LinkedIn are more effective than other sites. Among those who say social media is "very or somewhat beneficial" to business:

Among small business owners who use social networking, the top benefits cited include generating leads (50%), keeping up with the industry (45%), and monitoring online conversations (44%). 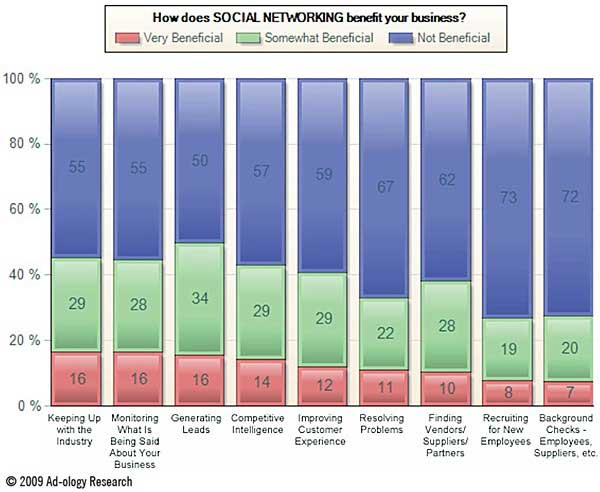 Asked about obstacles to using social media, 31% say their customers do not use social media and 29% say they do not have the time for it.

Looking for real data that can help you match social media tools and tactics to your marketing goals? The State of Social Media Marketing, an original research report from MarketingProfs, gives you the inside scoop on how more than 4,000 marketing pros are using social media to create winning campaigns, measure ROI, and reach audiences in new and exciting ways.

Among small businesses, 36% say they spent at least $1,000 on advertising in the previous 12 months. Of those who did not spend that much, 44% cited lack of money and 43% cited the overall high cost of advertising.

Consistent with last year, ad rates have the biggest effect on what type media is bought (48%), followed by the ability to reach where the best prospects are located (39%) and "what we've always done" with 36%. "Ease of buying" ranked higher this year, up five percentage points, or 25% higher than last year, indicating marketers' continued frustrations with the ad-buying process.

About the data: The Small Business Marketing Forecast study was conducted in November 2009 by Ad-ology Research and analyzes the attitudes and marketing plans of 1,100 owners of US businesses with fewer than 100 employees.