Although Super Bowl ads on average are more effective than the typical television commercial, ads placed in the first quarter of the Super Bowl are better remembered and better liked: 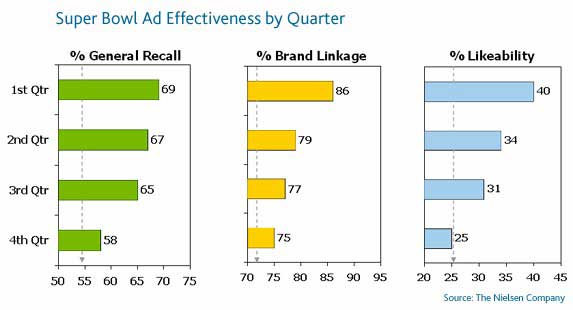 Across three metrics of ad effectiveness, including general recall, brand linkage, and likeability, there is a steep drop-off as the game progresses to the fourth quarter, when ad performance settles at a level that is closer to the average for all television ads.

"This survey reinforces the value of the Super Bowl as a marketing bonanza, featuring one of the most receptive TV audiences in the world," said Randall Beard, executive vice-president of Nielsen IAG.

"With so many viewers waiting for the pitch, the pressure is on advertisers to create and place ads that will have a lasting impact."

About the data: Results are based on a sample of more than 25,000 households in Nielsen's Homescan panel.