Nearly one in five (19.8%) of permissioned commercial emails failed to reach US and Canadian subscribers during the second half of 2009, a slight improvement from the 20.7% recorded in the first half of the year, according to a new study from Return Path.

That 19.8% consisted of 3.5% of all email routed to junk/bulk email folders and 16.3% not delivered at all––with no hard bounce message or other notification of non-delivery. 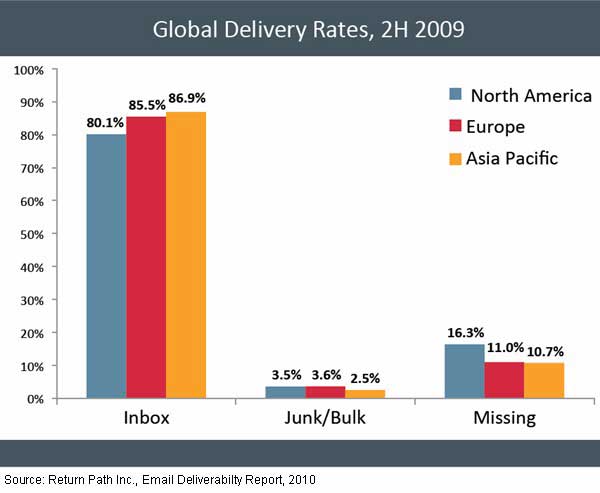 Permissioned emails reached 80.1% of consumers' inboxes in the US and Canada during the second half of 2009, slightly higher than the 79.3% recorded for the previous six months.
European marketers performed better than their colleagues in North America, with 85.5% of messages delivered to subscribers' inboxes. Meanwhile, the Asia/Pacific region outperformed both North America and Europe, recording inbox placement of 86.9%.

Below, other findings from the Return Path Global Email Deliverability Benchmark Report, 2H 2009.

Protected by email and spam filtering programs, business inboxes are generally more difficult to reach: During the second half of 2009, 75.2% of email was delivered to inboxes through enterprise systems, up 2.8 percentage points from the 72.4% reported in the first half of 2009. 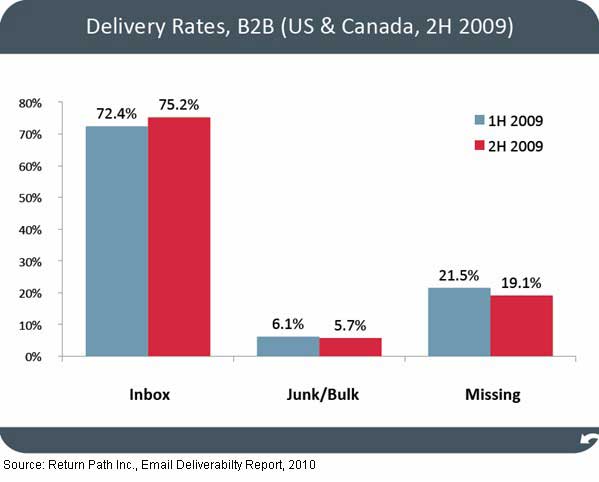 Non-delivery rates for B2B email in the second half of the year held relatively steady. Bulk/junk email was down just 0.4 points, and missing email shrank by 2.4 points.

Successful deliverability to consumers' inboxes varies by Internet service provider (ISP). Google's Gmail is the most stringent US-based ISP for permissioned marketers to reach: 23.1% of emails sent to Gmail addresses did not reach the inbox in the second half of 2009, followed by Hotmail (20.2%), and MSN (20.0%) 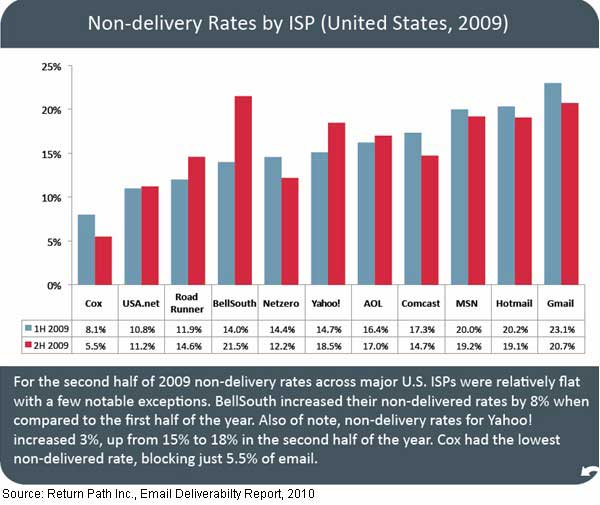 Other key findings from the second half of 2009:

About the data: The Return Path Global Email Deliverability Benchmark Report, 2H 2009 was compiled from data from 131 ISPs in the US, Canada, Europe, and Asia/Pacific regions from July to December, 2009. The study tracked the delivery, blocking, and filtering rates for more than 600,000 campaigns.