Contrary to speculation that social networking communications would replace traditional email, the amount of time consumers spend exchanging personal email has held steady: 71% of online consumers spent 20 minutes or more weekly exchanging email with friends and family in 2009, the same level recorded in the previous year, according to a new survey from Merkle.

Below, other findings from Merkle's View from the Social Inbox, which explores consumers' use of and attitudes about online social media and related email use.

Two-thirds of online consumers surveyed (age 18+) are active on top social networking sites. Those sites used by consumers at least once a week are the following:

Some 34% of consumers are not active on any of the top social networking sites.

Over two-fifths (42%) of social networking consumers check their email account at least four times daily, compared with 27% of those not socially networked. 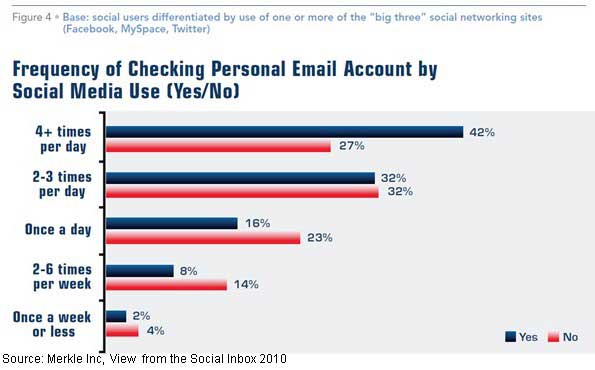 In addition, 48% of social networking consumers spend 45+ minutes weekly with personal email, compared with 40% of those not socially networked.

However, the use of social networking may not be the only driver of such behavior, according to Merkle. Part of the variation is likely due to the age skew of social networking consumers, who are younger and tend to check their personal email accounts more frequently than adults overall.

The trend is more evident in some age groups: 57% of mobile email consumers age 30-39 access their personal email account at least four times daily using their Internet-enabled phone, compared with 42% of online adults.

Meanwhile, 28% of social networking consumers use mobile email, compared with 14% of those not socially networked.

Email Use by Age 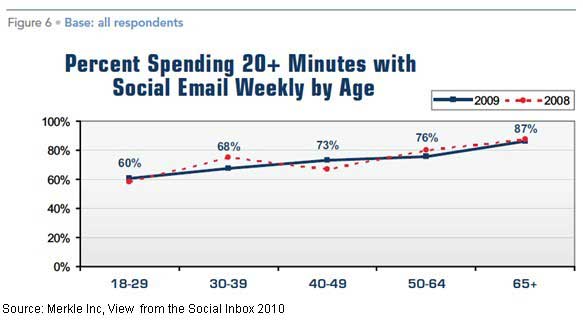 Social Networking Use by Ethnicity 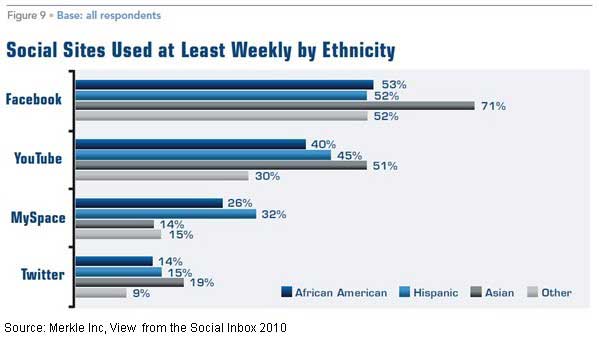 About the data: Findings are from Merkle's annual View from the Inbox study, an online survey of 3,281 US adults age 18+ conducted during fall 2009.