Less than a week before iPad's April 3 ship date, nearly two-thirds (65%) of consumers are aware of Apple's tablet device and 15% are already thinking about buying it in the next three months, according to comScore.

Awareness for the iPad is matched only by awareness of the Amazon Kindle (65%), whereas awareness of the Sony Reader and the Barnes and Noble Nook trail significantly: 39% and 28%, respectively. 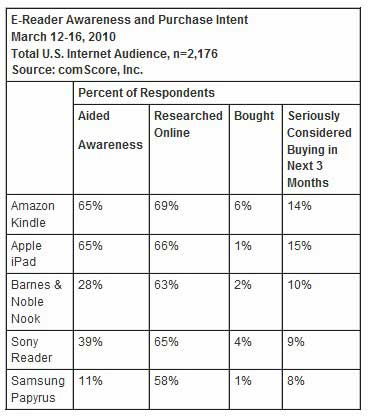 Below, other findings from comScore's study on the Apple iPad and e-reader consumer attitudes, behaviors, and purchase intentions. 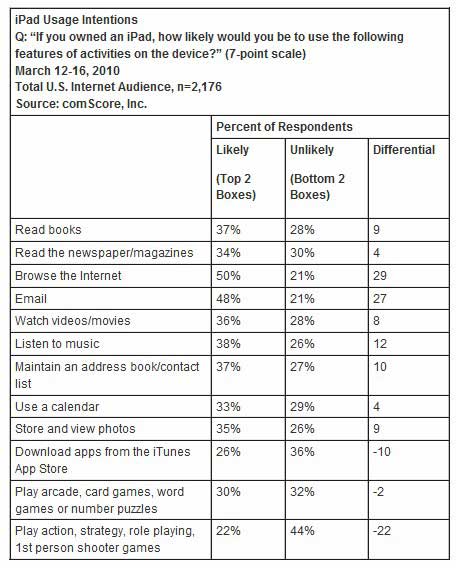 Over one-third (36%) of consumers say they're unlikely to use the iPad to download mobile applications, while 26% say they would do so.

Over one-half (52%) of "iOwners" (those who own an iPhone or iPod Touch) say they are willing or very willing to pay for newspaper and magazine subscriptions formatted for e-readers, compared with just 22% of non-iOwners.

Similarly, those who are already familiar with making digital content purchases via iTunes have a much higher receptivity to making purchases for the iPad: 50% of iOwners who also own an e-reader report having spent at least $60 on e-books in the past three months, compared with only 24% non-iOwners.

Furthermore, younger users indicate a significantly higher willingness to pay for news and magazines formatted for e-readers: 68% of consumers age 25-34 and 59% of those age 35-44 say they would be willing to pay for such content, substantially higher percentages than those age 45+.

The most important device attributes (top 2 boxes on a 7-point scale) that consumers would like to have included in the iPad are the following:

"The tablet and e-reader market is developing at a breakneck pace right now, and Apple's entry into the market is sure to accelerate mainstream consumer adoption," said Serge Matta, comScore EVP.

"These devices have the potential to be incredibly disruptive to the way consumers currently access digital content. While only time will tell exactly how consumer behavior will change, our research suggests that not only will a variety of markets be impacted by the introduction of these devices but also that there are substantial opportunities for those in the digital content ecosystem."

Other findings issued by comScore:

About the data: Findings are from comScore's survey of 2,176 Internet users regarding their awareness, attitudes, and opinions of the Apple iPad and other e-readers/tablet devices. Results were analyzed across age and gender profiles, as well as the "iOwners" consumer segment, defined as those owning either an iPhone or iPod Touch.