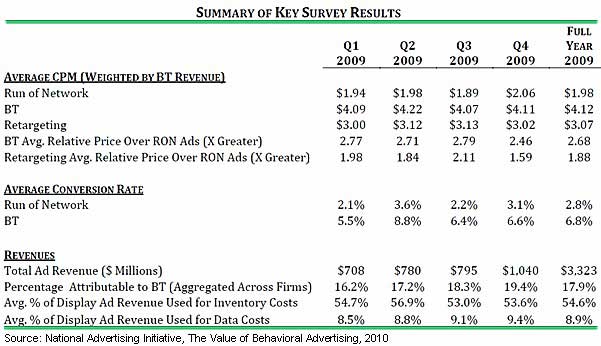 Retargeting ads generated on average 1.88 times the revenue RON ads throughout the year, while average CPMs for retargeting ads were approximately twice those of RON ads.

Below, other findings from the NAI-commissioned study, The Value of Behavioral Targeting, based on proprietary data from 12 major advertising networks and conducted by economist Howard Beales.

Value of Ad Types by Vertical

There was considerable variability in CPMs by vertical during 2009: The auto group was the most valued audience, generating average CPMs of $4.99, followed by travel ($3.43) and health ($3.18).

BT advertising was more than twice as effective as RON advertising in converting consumers into buyers: 6.8% vs. 2.8%.

Such differences in conversion rates for BT and RON advertising are consistent with the differences in pricing discussed above. However, the conversion finding is based on a sample size of just five ad networks, the study points out.

BT is essential for ad network and publishers, especially mid- to long-tail publishers that most often rely on ad networks: Among the 12 companies studied, total online ad revenue was $3.323 billion in 2009, of which BT advertising accounted for an average 17.9%.

More than one-half of the ad networks' display ad revenue (54.6%) went toward the purchase of inventory in 2009—and was therefore shared with publishers and content producers to support their businesses. The proportion of revenue allocated to data was an average of 8.9% for the year. 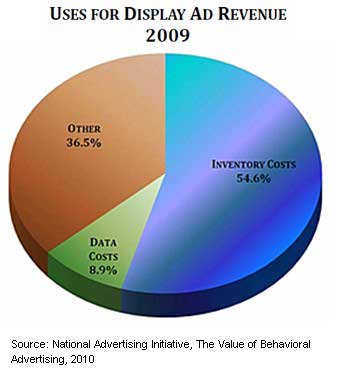 The remaining 36.5% of revenue is likely allocated to other costs, overhead, and profit, according to the study.

"This study demonstrates the increasing significance of behavioral advertising to the economic model supporting free online content and services for consumers, as well as the need for careful consideration of policies that would affect the current online advertising marketplace and the innovation it supports," said Charles Curran, NAI's executive director.

About the data: Findings are from The Value of Behavioral Targeting, by economist Howard Beales, conducted from January to March 2010 among 12 online ad networks that belong to the NAI. The NAI is a coalition of some 40 online marketing companies that promote responsible business and data management practices and standards in the US.