Ranked by market share, the following were the top location-based digital video ad networks included in the Nielsen report: 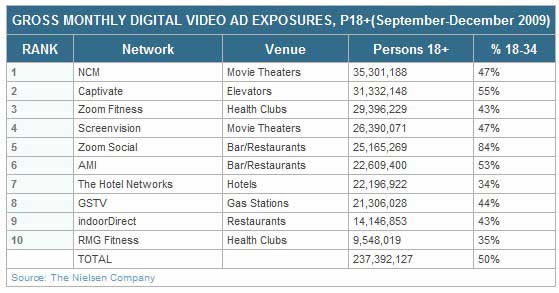 Among total exposures delivered to adults age 18+, 54% were displayed to male audiences.

An estimated 50% of all the monthly exposures to adults were displayed to men and women in the key age 18-34 demographic.

Children and teenagers accounted for a large proportion of audiences in movie theaters: Nearly 23 million gross monthly exposures were delivered each month to moviegoers under age 18, or over one-quarter of the total audience levels in that venue.

The Fourth Screen vs. Other Media

For example, the C3 average audience for a primetime broadcast TV commercial was three million viewers age 18+ in October 2009. During that same period, video ad exposures to NCM's and Screenvision's movie theater networks combined for an average 61.7 million—implying that it took roughly 20 primetime ads to reach the same audience as a typical month-long advertising flight on both movie theater networks.

About the data: The report was assembled using Nielsen's integrated approach of combining traffic and transaction data with demographic and qualitative data. Traffic and transaction data were gathered through standard onsite traffic counts, third-party reported transactions, and client-supplied transaction data that were either audited against third-party data or accompanied by an affidavit of accuracy. Custom measurements were conducted to assemble demographic and qualitative data for all venues appearing in the report. These measurements consisted of onsite interviews, online surveys, and telephone surveys.