The US display ad market has made a comeback in the last few months, led by JPEG ads, which accounted for 42.4% of impressions in May, and leaderboard-style banner ads (728 x 90 pixels), among the most commonly viewed display ad sizes, according to data from comScore's Ad Metrix Creative Summary report.

"We've witnessed a strong resurgence in the display ad market over the past several months, with the number of impressions up 15% vs. a year ago and average CPMs also continuing to rise," said Jeff Hackett, comScore SVP. "One of the several drivers of strength in this market has been the innovation occurring with respect to ad units, as larger and more engaging creative ad formats are employed." 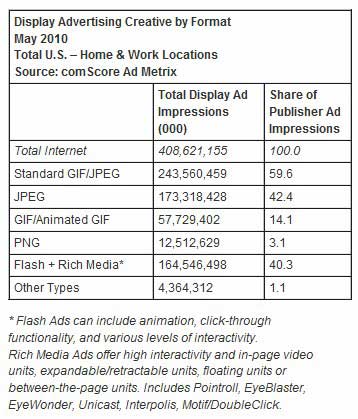 Among the most common ad formats, banner ads accounted for 23.1% of impressions, followed closely by rectangles (22.7%) and nonstandard units (22.1%). 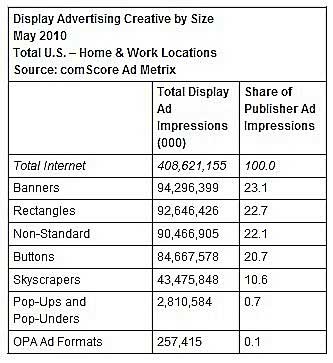 Below, the market share (percent of display ad impressions) of the most common display ad sizes:

Pop-ups and pop-unders now represent less than 1.0% of all display ad impressions, likely a function of the pop-up blockers now standard in most browsers. New OPA (Online Publishers Association) ad formats, such as the 970 x 418 pushdown and 468 x 648 XXL box, are just beginning to gain adoption and now account for just 0.1% of impressions.