The Web's most influential teens are more likely than other teens to actively participate in social media and digital activities, such as updating their social networking status and sending text messages, but they are also more likely to spend time influencing their peers and socializing offline, according to a survey from myYearbook and Ketchum.

Teen social media influencers—defined in the study as the top 15% most active and most engaged teens in the myYearbook community—are more likely than other teens to engage in various digital activities:

Just 16% of teen social media influencers say they use a location-based mobile application, such as Foursquare or Gowalla.

Below, other findings from the Social Media Teen Influencer Survey. 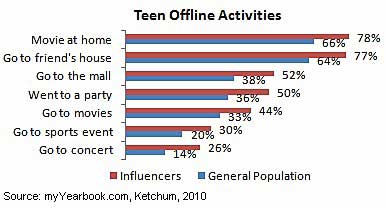 Teen social media influencers also like to talk about what they buy: 87% say they share information about the products they use with their friends, compared with 50% of other teens.

Such teen influencers are more likely than other teens to have recommended a wide range of products and services in the previous six months, such as clothing (84% vs. 68%), cosmetics and skincare products (63% vs. 47%), and electronics (87% vs. 74%).

Overall, teens are more likely to read and pass along content that's funny (88%) or shocking (77%). 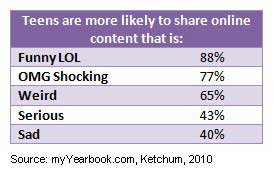 Interestingly, most teen social media influencers prefer interaction from brands to be clear and straightforward: Only 47% prefer a humorous approach from brands.

Teen influencers are also 41% more likely than other teens to be interested in celebrity news.

When watching TV, teen social media influencers are more likely than other teens to simultaneously use their phones or computers: 88% say they text while watching TV (vs. 74% of other teens) and 79% say they are online (vs. 66%).

Overall, however, teen social media influencers spend less time watching TV than they do on the Web: One-half spend 3+ hours online per day; only one-quarter spend that amount watching TV.

Overall, younger teen influencers (age 15-17) are the most engaged online, with activity among 18- and 19-year-olds dropping slightly, likely due to increased face-to-face socialization after entering college or leaving home.

About the data: Findings are from the Social Media Teen Influencer Survey, conducted by myYearbook and the Ketchum Global Research Network from May 5 to 11, 2010, among a representative sample of 10,000 myYearbook.com members age 13-19.