Mobile Proximity Marketing Forecast: $6B by 2015

Driven by increasing consumer adoption of mobile devices such as the smartphone and iPad, mobile proximity marketing is forecast to reach $760 million in 2011, and swell to nearly $6 billion by 2015, according to a report by Borrell Associates.

An estimated $200 million will be spent on mobile proximity marketing in 2010, almost entirely (97%) by large national companies that have retail stores in many markets. As proximity-based technologies begin to mature, smaller local businesses are expected to enter the market, helping to propel it to nearly 30 times its current size by 2015. 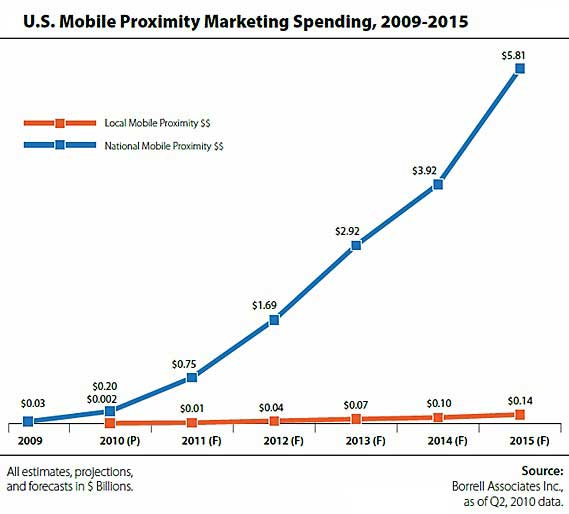 Mobile proximity marketing now accounts for a very small portion of overall mobile promotions spending—an estimated 7% in 2010. In 2011, that share will increase to 12.5%, and by 2015, proximity-based marketing will account for roughly 29% of all mobile marketing spending.

Below, other findings from the report titled Proximity-Based Marketing: Mobile Devices Untether Advertising from Media.

Though still nascent, proximity-based marketing poses radical challenges to the mass media model of targeting large, aggregated local audiences—in favor permission-based offers to shoppers when they are physically near a purchase opportunity or other relevant location.

Moreover, there is a new retail audience that can only be reached via mobile: One-third of smartphone users who access retail information with their mobile devices are generally unreachable via other media channels (e.g., newspapers, yellow pages, TV), according to Millennial Media (August SMART report). 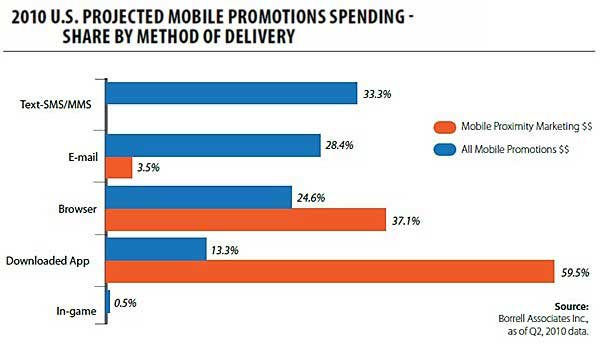 About the data: Findings are from the Proximity-Based Marketing report, the third in a series of three reports on mobile marketing by Borrell Associates.