Next-generation media consumers, or "Off the Gridders," are young, educated, and affluent, and they spend less time viewing live TV but more time viewing online and time-shifted premium video content, according to a study by SAY Media. Such tech-savvy consumers are also difficult to reach via traditional broadcast media and other broadly targeted ad campaigns.

On Demanders consume more video content weekly than Internet users on average, primarily via time- and device-shifting, but they are the least receptive to TV, online, and mobile ads. For example, 52% of On Demanders say online ads are too long, compared with 42% of all Internet users. Similarly, On Demanders are also more likely to agree there are too many ads for each TV video content segment.

Key characteristics of On Demanders include the following: 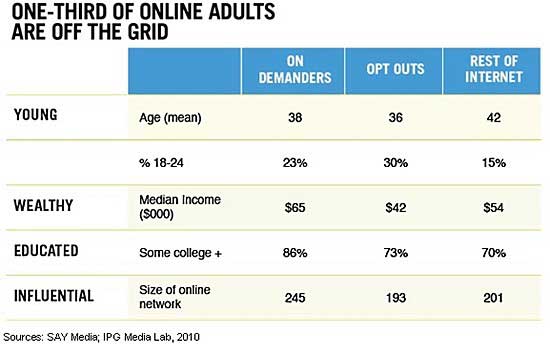 TV Opt Outs are even younger on average (age 36) and educated: 73% have some college education.

Below, other findings from the study titled Off the Grid: Marketing to the Next Generation Media Consumer, by SAY Media and IPG Media Lab. 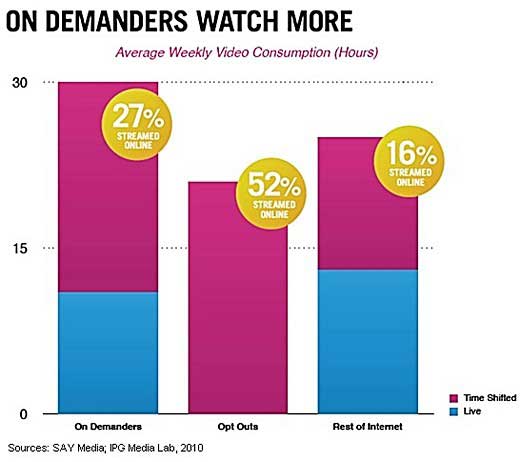 The evening hours (8:00 pm to 11:00 pm) are still primetime viewing hours for all media consumers. Even three out of four TV Opt Outs watch video content during that time, though not live TV. Roughly one-half of On Demanders—as well as all Internet users—are watching live TV during that time slot.

Opt Outs Most Receptive to Ads 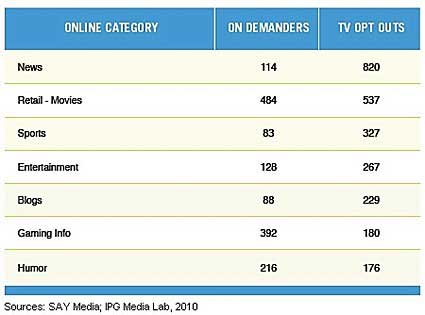 Meanwhile, On Demanders spend more time with online entertainment categories, such as gaming and humor.

Interestingly, TV Opt Outs are more receptive to online and mobile advertising. Opt Outs understand the implicit trade-off for receiving their favorite shows and programming for free, online or via streaming video, according to SAY media.

About the data: Findings are based on qualitative and quantitative research, including a passive behavioral analysis via comScore's opt-in panel, of 1,159 Internet users, consisting of 232 Opt Outs and 305 On Demanders, as well as face-to-face interviews with eight Off-the-Grid households in Chicago and San Francisco; the studies were conducted by TRU in August 2010.