US Internet advertising revenues reached an estimated $6.4 billion in the third quarter of 2010, a record high for the online ad industry and 17% higher than the same period in 2009, according to the Interactive Advertising Bureau (IAB) and PwC. 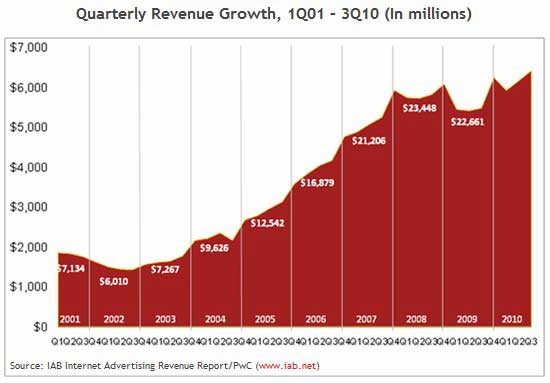 The third-quarter results come on the heels of strong first-half 2010 revenues, which reached an estimated $12.1 billion, up 11.3% from 1H09 and setting a new half-year record, according to the IAB.

Overall, third-quarter growth was attributed to increases in demand across all digital ad categories, including search, display, video and mobile, reflecting continued shifts in consumer behavior toward the Internet and away from traditional media, according to PwC.

"The Internet has transformed consumers' lives and how they experience entertainment, information and brands," said Randall Rothenberg, president & CEO, IAB. "Marketers have embraced digital media because that's where they can engage with their consumers. This vibrant, innovative industry is creating jobs and contributing to the growth of the US economy."

The numbers are consistent with Morgan Stanley Internet analyst Mary Meeker's recent projections that the Web ad economy has significant upside potential—as much as $50 billion in annual revenues.

At the Web 2.0 Summit in San Francisco held on November 16, 2010, legendary Web analyst Meeker led a presentation on the state of the Internet industry during which she argued that the amount of money marketers now spend on online advertising is too low, given how much time consumers spend on the Web, an estimated 28%, according to the report.

Among Meeker's other ad-related projections: