Ad Recovery Picking Up Over Next 3 Years

Global ad spending is forecast to reach $449.6 billion in 2010—up 4.9% from a year earlier—and continue to grow between 4.6% and 5.2% over the next three years, fueled by digital media and strong ad growth in developing markets, according to projections by ZenithOptimedia. 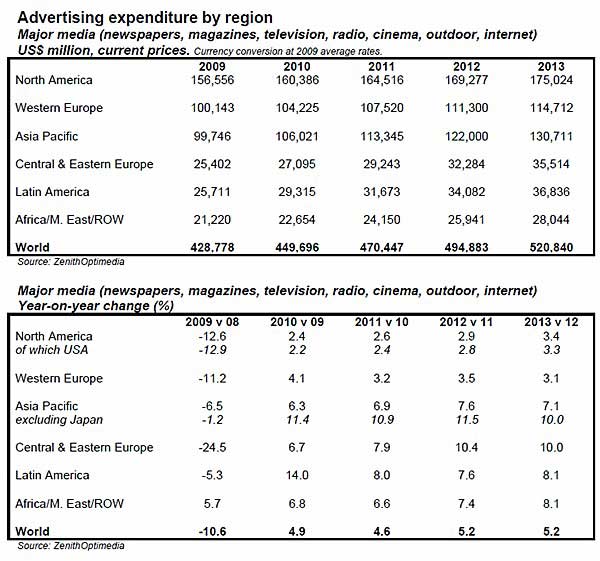 With the Chinese economy forecast to grow 51% between 2010 and 2013, China is expected to overtake Germany to become the world's third-largest ad market in 2011, staying at that position throughout the forecast period. China is currently just over one-half (52%) the size of Japan, the second-largest ad market, and is projected to become three-quarters (76%) of its size by 2013.

With the US market returning to growth, it will contribute the most new ad dollars to the global market between 2010 and 2013 ($13.3 billion), despite its slow pace. 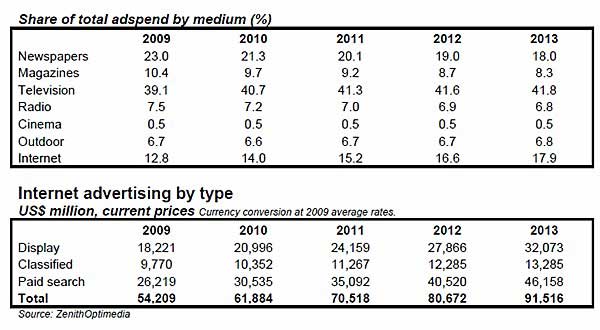 TV's share of the ad market has increased from 37.1% in 2005 to 40.7% in 2010, and will rise to 41.8% in 2013. Those strong 5-year results are due to industry improvements such as bigger and higher-quality displays, more channels delivered by digital television, and the convenience of PVRs, ZenithOptimedia said.

Ad expenditure in newspapers and magazines are forecast to decline 2% between 2010 and 2013, while Internet advertising grows three times faster than the market as a whole, up 48% during the period.

Advances in technology are expected to help TV and cinema each grow 19% between 2010 and 2013, while outdoor grows ahead of the market at 18%.

About the data: Ad-expenditure projections are issued on a quarterly basis by ZenithOptimedia. The above is based on projections issued in December 2010.

Continue reading "Ad Recovery Picking Up Over Next 3 Years" ... Read the full article