Banner Ads Most Ignored on Web

More than three in five Americans (63%) say they ignore or disregard Internet ads, according to a new Adweek Media/Harris Interactive poll. Internet banner ads are the most ignored (43%), followed by search engine ads (20%). 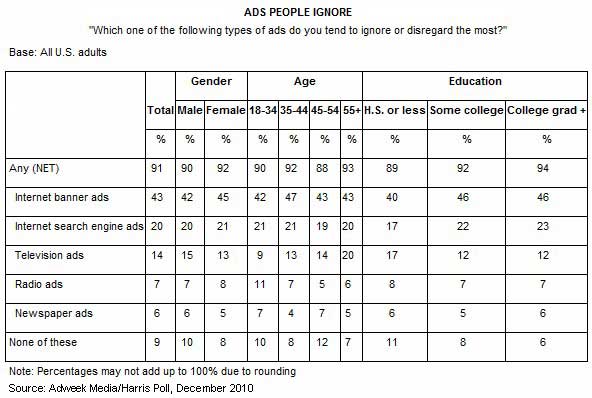 Overall, more than four in five Americans (91%) say they ignore some ads.

Below, other findings from the Adweek Media/Harris Interactive Poll.

Adults age 35-44 are most likely to ignore Internet banner ads most: 47% say they do, compared with between 42% and 43% of other age groups.

Some 46% of both adults with some college and those with a graduate education say they ignore Internet banner ads, compared with 40% of those with a high school degree or less.