Moreover, Facebook was the top-visited website (for the first time) in 2010, accounting for 8.93% of all US visits, Experian found.

Below, additional findings and analysis issued by Experian Hitwise.

Four variations of the term "facebook" were among the top 10 terms and accounted for 3.48% of searches overall.

The term "facebook login" moved up from the 9th spot in 2009 to the second spot in 2010. YouTube was the third most-searched term in 2010, followed by craigslist, myspace, and facebook.com. 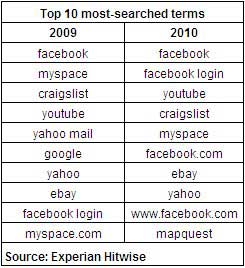 Analysis of the search terms revealed that social networking-related terms dominated the results, accounting for 4.18% of the top 50 searches. 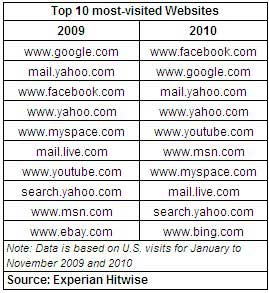 The top generic search term was "hulu" within the Television category.

Sports: The top searched for athlete was Tiger Woods and the top sports team was the Dallas Cowboys from within the Sports category.

News and Media: The top searched-for person was Bret Michaels followed by Tiger Woods and Sandra Bullock within the News and Media category in 2010.

Employment: Indeed accounted for 2.47% of all searches in the US among the top 50 terms for the Employment category in 2010 when combining common search terms—e.g., indeed and indeed.com.

About the data: The cited data is from Experian Hitwise, featuring the top search terms and websites for 2010, based on Jan-Nov data.