Mobile campaigns continue to be a powerful ad channel for marketers, outperforming online advertising by roughly three times across a variety of metrics, including ad awareness, message association, and purchase intent, according to a study by InsightExpress. 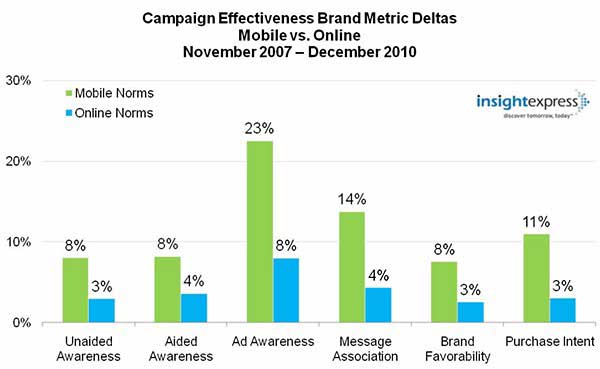 Despite mobile's clear lead, however, the gap between the two media channels has narrowed. For example, the norms of mobile campaigns conducted from Nov. 2007 to Dec. 2009 were 6.0 times higher than online in purchase intent, 4.5 times higher in unaided awareness, 4.7 times higher in message association, and 5.0 times higher in brand favorability.

Below, other findings from the 2010 Mobile InsightNorms study, which analyzed the effectiveness of over 100 mobile ad campaigns conducted from Nov. 2007 to Dec. 2010.

Meanwhile, message association—which measures the ability to track a message to an advertiser—reached 20% during the period, up from roughly 11% in the previous two years.

With larger screens and richer interfaces, mobile campaigns viewed via smartphones are more effective overall than feature phones. Most significantly, smartphones generated an average increase of 39% in ad awareness, compared with 28% via feature phones. 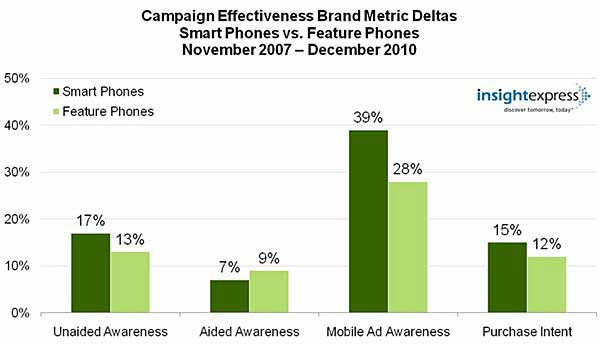 Results in other measures such as unaided awareness (17% vs. 13%) and purchase intent (15% vs. 12%) were less significant, but feature phones registered higher effectiveness than the smartphones in ad awareness (9% vs. 7%).

Among other industry-related findings:

About the data: The study used norms developed in online ad testing as a benchmark to draw conclusions around the performance of advertising on mobile devices. InsightExpress compared the two using InsightNorms, the company’s normative database containing 1,000+ online ad effectiveness campaigns and 100+ mobile ad effectiveness campaigns, from Nov. 2007 to Dec. 2010.