Nearly one-half of mobile apps users (47%) say when using apps, they click or tap on ads more often by mistake than on purpose, suggesting that click rates may not be the best measurement of mobile ad effectiveness, according to a survey from Pontiflex.

Younger adults are most likely to click by accident: 61% of mobile apps users age 18-34 click on mobile app ads by mistake more often than on purpose. 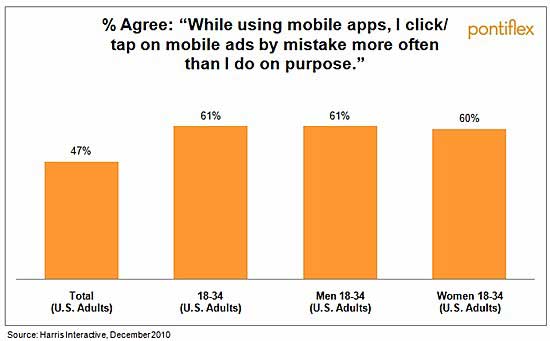 Below, other findings from the online survey conducted by Harris Interactive on behalf of Pontiflex, which explores consumers' perceptions of mobile advertising.

People don't want to be disturbed when using apps: 71% of adult mobile apps users say they prefer ads that keep them within the app they're using, instead of ads that take them out of the app to a mobile Web browser. 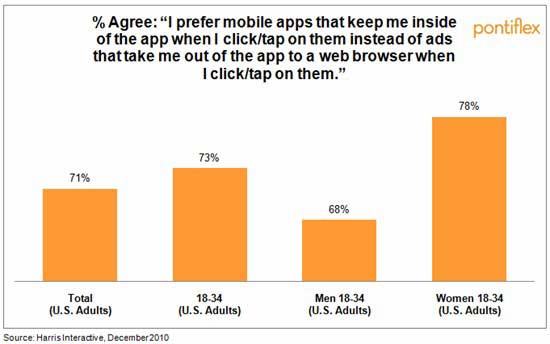 Younger women are the least tolerant of mobile ad disruptions: 78% of female mobile apps users age 18-34 say they prefer ads that keep them within the app they're using.

The trend is also prevalent among more affluent demographics: 96% of mobile apps users with annual household incomes of $75,000+ say they use free apps, signaling the importance of mobile ads, which serve as a revenue stream for publishers and developers to help keep apps free.

Most (63%) mobile apps users say they prefer ads that contain coupons, deals, and newsletters as their preferred in-app mobile ad type, and far fewer are open to receiving updates from apps developers (38%), or video ads (15%). 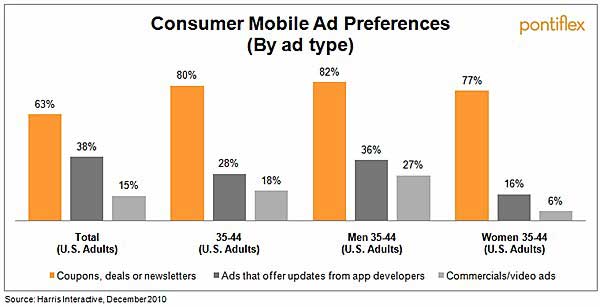 Worldwide mobile app store downloads are forecast to reach 17.7 billion in 2011, up 117% from an estimated 8.2 billion downloads in 2010, according to separate research from Gartner.

Free downloads are expected to account for 81% of total mobile app store downloads in 2011.

By the end of 2014, more than 185 billion apps will have been downloaded from mobile app stores, since the launch of the first one in July 2008.

Meanwhile, mobile app store revenues are projected to reach $15.1 billion in 2011, both from end-users buying apps, and associated ad revenues for apps developers. That's a 190% increase from the estimated $5.2 billion generated in 2010.

About the study: Harris Interactive conducted two online surveys in the US on behalf of Pontiflex in December 2010 via its Quick Query omnibus product. The first was conducted Dec 14-16, 2010 among 2,052 US adults age 18+, and the second Dec 27-29, 2010 among 2,118 US adults age 18+. Figures for age, sex, and household income were weighted where necessary to bring them into line with their actual proportions in the population.