Among 255,431 social media conversations focused on Super Bowl ads, Volkswagen, Doritos, Pepsi, Groupon, and Motorola were the top 5 advertisers, garnering the most social media mentions from December 1, 2010 to February 6, 2011, according to a study by Alterian. Microblogs, (e.g., Twitter) were the top media source, comprising more than two-thirds of such conversations.

Below, other findings from Alterian's report, Buzz Bowl 2011, which measures social engagement of Super Bowl advertisers.

While Sentiment measures numbers of social media mentions, the Social Engagement Index* factors in additionally the reach of those mentions. Pepsi ranked highest (272), followed by Volkswagen (220) and Doritos (203). 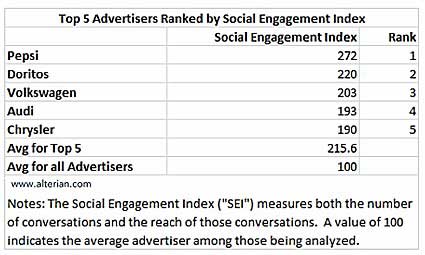 Below, a list of Super Bowl advertisers, ranked by Social Engagement Index scores: 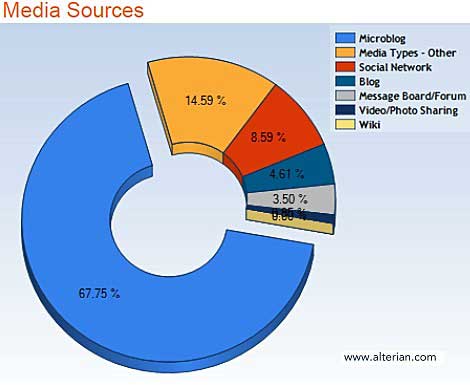 * Alterian's Social Engagement Index measures both the volume and potential reach of ad-related conversations using a popularity metric (0 to 10) to indicate the reach potential of mentions, with higher values indicating a higher popularity of the individual making the comment. For example, in order for a Twitter post to score a "10," an individual would have to have more than 5,000 followers. The index is calculated by summing the popularity scores for each conversation for each advertiser, and then indexing the popularity score against the average popularity of all advertisers. A score of 100 would indicate the average Super Bowl advertiser.

** Results were collected from publicly available social media sources—i.e., results from private Facebook pages and other private networks were not included in the analysis.