Digital marketers may be missing opportunities by focusing ad campaign spending solely on premium short-tail websites: Average click-through rates (CTRs) for ads placed on long-tail websites are 24% higher than those placed on short-tail sites, according to a study from CONTEXTWEB.

Below, other findings from the CONTEXTWEB's Intelligence Report: Using Long-Tail Sites to Optimize Media Spend, March 2011, based on ad performance data from roughly 1,000 campaigns in the second half of 2010. 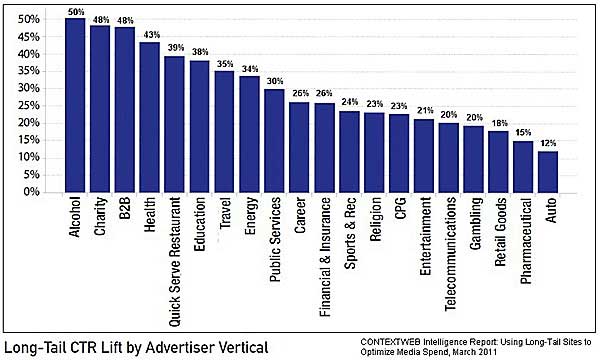 Among 21 publisher categories, 16 categories registered increased CTRs on long-tail sites. Among the top three, education generated a 64% lift, followed by tech and computing (57%) and hobbies and games (49%). 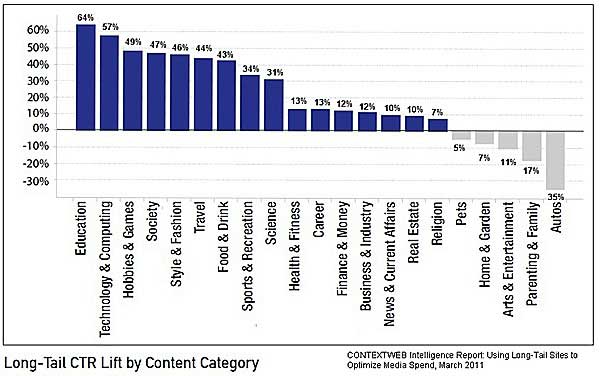 In five content categories, ads on short-tail sites outperformed long-ail ads, registering lifts in CTR ranging from 5% to 35%. Such gains, however, are often offset by the premium price paid for such ads, CONTEXTWEB notes.

About the data: CONTEXTWEB's Intelligence Report: Using Long-Tail Sites to Optimize Media Spend, issued in March 2011, is based on the analysis of digital media performance across roughly 18,000 publisher sites and 1,000 campaigns in the second half of 2010.