Total measured advertising expenditures increased 6.5% in 2010 over 2009 levels, to $131.1 billion, according to data released by Kantar Media. Ad spending in the fourth quarter of 2010 was up 7.0% compared with the same period a year earlier, driven by small advertisers ranked outside the Top 1,000.

"The feel good headline is the ad economy grew by 6.5% in 2010," said Jon Swallen, SVP of research at Kantar Media. "The more comprehensive assessment is that increased spending has not benefited all sectors equally. While television media have recouped their losses from the 2009 advertising downturn, several other large segments are still 15 to 20% below their 2008 peaks."

Below, measured ad expenditure-related data and analysis from Kantar Media. 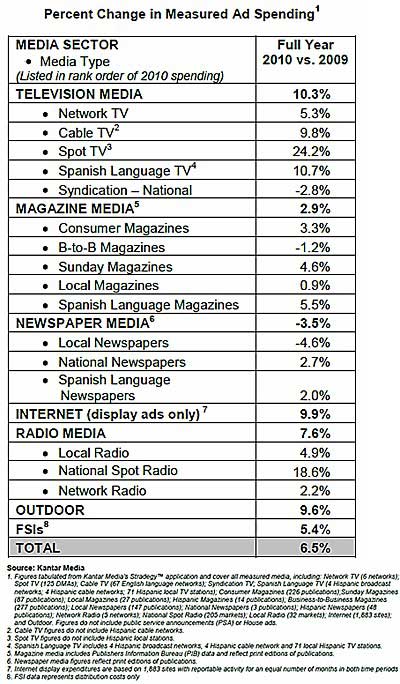 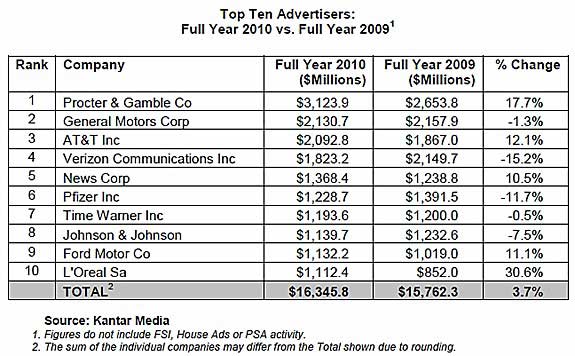 Among the top 10 advertisers: 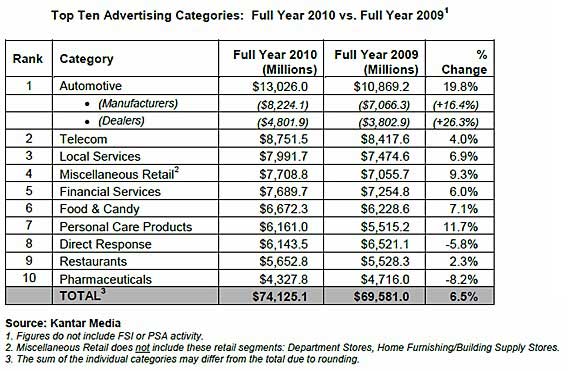 In the fourth quarter of 2010, an average hour of monitored prime time network programming contained 6 minutes, 57 seconds (6:57) of in-show brand appearances and 14:50 of network commercial messages. The combined total of 21:47 of marketing content constitutes 36% of a prime-time hour.

Note: Kantar Media monitors branded entertainment within network prime time and late night programming. The tracking identifies brand appearances and measures their duration and attributes. Given the short length of many brand appearances, duration is a more relevant metric than a count of occurrences for quantifying and comparing the gross amount of brand activity that viewers are potentially exposed to in the program versus the commercial breaks.