Global ad expenditure is now forecast to grow 4.2% in 2011, down from the 4.6% forecast in December 2010, due to the effects of political instability in the Middle East and the earthquake in Japan, according to projections by ZenithOptimedia.

Even so, online advertising is expected to continue surging worldwide, with 16.4% average annual growth projected for display advertising through 2013, and double-digit growth in paid search and online classifieds expected over the same period.

The cumulative ad spending losses attributable to the events in Japan and the Middle East are projected to total $2.4 billion in 2011. Still, ad recovery is forecast to continue over the long term due to quick rebounds of both shock-affected economies: 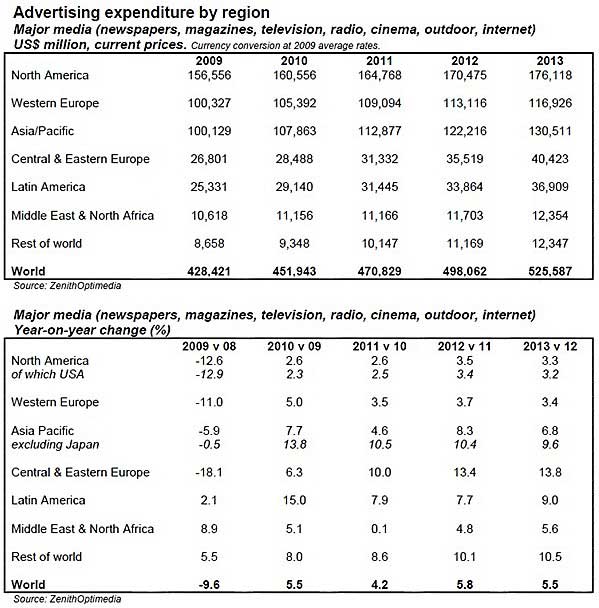 Global ad spending now forecast to grow 5.8% in 2012, up from the 5.2% projected in December, but the disparity in growth rates between developed and developing markets continues.

The Japanese ad market is expected to grow just 0.7% annually between 2010 and 2013, while the Middle East is forecast to grow 0.1% over the same period, as advertisers tread carefully amid political instability.

Developing markets—defined as everywhere outside North America, Western Europe, and Japan—are projected to grow their share of the global ad market, from 30.9% in 2010, to 35.1% in 2013.

Three developing markets are expected to take their place among the world's top 10 ad markets by 2013, up from the two (Brazil and China) ranked in 2010.

The US will contribute most new ad dollars to the global ad market over the next three years ($14.2 billion ) due to its sheer size—3.5 times the next-largest market. 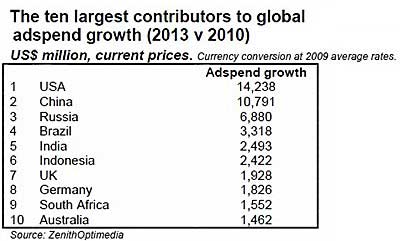 Overall, developing markets are forecast to contribute 62% of new ad dollars over the next three years.

The Internet is expected to become the world's second-largest ad medium by 2013, overtaking newspapers. Although newspaper ad spending was still 51% larger than Internet ad expenditure in 2010, newspaper spending is shrinking 1.4% annually, as circulations fall in developed markets and readers migrate to the Web.

Meanwhile Internet advertising is forecast to grow at an average annual rate of 14.4% between 2010 and 2013. 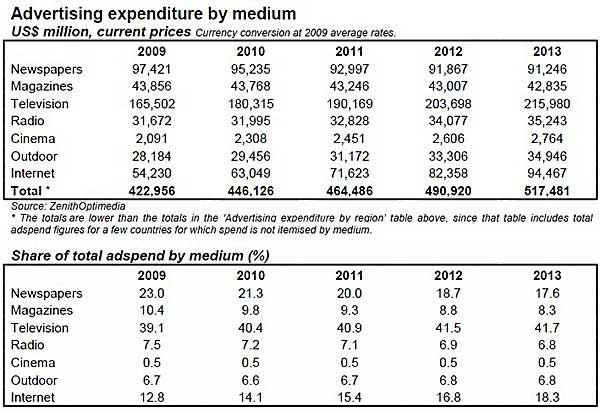 Television is the largest medium and continues to increase market share. TV attracted 40.4% of global ad expenditure in 2010, up from 37.3% five years earlier, and is expected to attract 41.7% in 2013. People are watching more television than ever, due to bigger and higher-quality displays, more channels delivered via digital TV, and the convenience of PVRs, according to ZenithOptimedia. TV ad expenditure is forecast to rise from $180.3 billion in 2010, to $216.0 billion in 2013.

In the digital space, display advertising (including online video and social media) has overtaken search as the main driver of Internet ad growth.

About the data: Ad-expenditure projections are issued on a quarterly basis by ZenithOptimedia. The above projections were issued in April 2011.