Use of Video-Sharing Sites on the Rise

Watching video online is becoming more popular in the US, particularly among rural audiences: 71% of online adults now use video-sharing sites such as YouTube and Vimeo, up 5 percentage point (PPs) from the 66% who did so a year earlier, according to a new report by Pew Research. 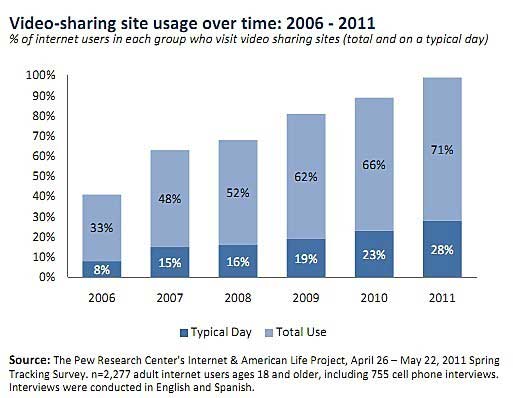 Below, additional findings from the 2011 report on social-sharing websites, issued by the Pew Research Center's Internet & American Life Project and Project for Excellence in Journalism.

Rural Audiences Catching Up With Others

Rural Internet users are now just as likely as users in urban and suburban areas to have used video-sharing sites: 68% of rural Internet users say they now use such sites, up 31 PPs from the 37% who said they did so in June 2009. 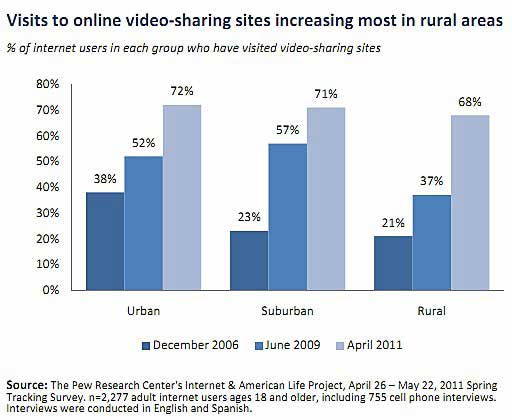 Even so, city folk lead the way in watching video online: 72% of online urban residents say they now use video-sharing sites, up 19 PPs from the 52% who did so two years earlier.

Meanwhile, rural Internet users are still less likely to be visiting video‐sharing sites on a typical day (14% vs. 31% and 33% for suburban and urban residents, respectively). 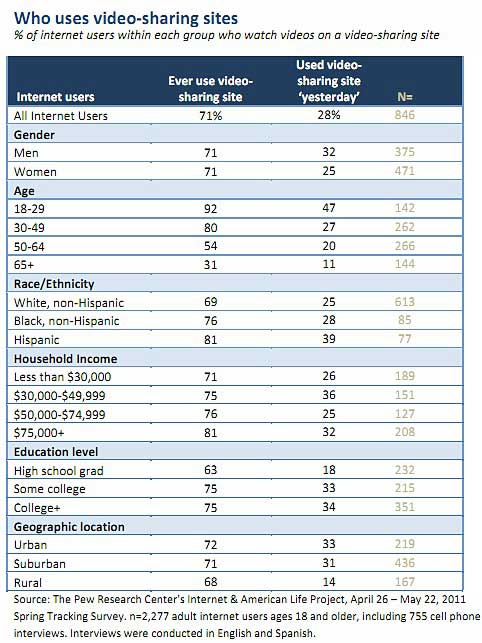 About the survey: Findings are from the report "71% of Online Adults Now Use Video‐Sharing Sites," authored by Kathleen Moore, Pew Internet Project, issued by the Pew Research Center's Internet & American Life Project and Project for Excellence in Journalism, July 26, 2011, and accessed on the same day. Data are based on a survey of 2,277 adults, age 18 and older, conducted by Princeton Survey Research Associates International from April 26 to May 22, 2011.

Continue reading "Use of Video-Sharing Sites on the Rise" ... Read the full article