If the 2011 holiday shopping season follows the trends of the 2010 season, consumers are likely to start searching online for holiday gifts early this year and Cyber Monday will edge out Black Friday as the most profitable day for online retailers, according to data from Marin Software's 2011 Online Marketer's Guide for the Holidays, a series of recommendations for online retailers based on 2010 holiday shopping data.

During the 2010 holiday shopping season, four of the five top days for paid search conversions occurred in November. Cyber Monday (Nov 29, 2011) topped the list, accounting 26% of holiday conversion volume, followed by Black Friday (Nov 26) with 23%, and Nov 28, Nov 30, and Dec 6 each with 17% of conversion volume. 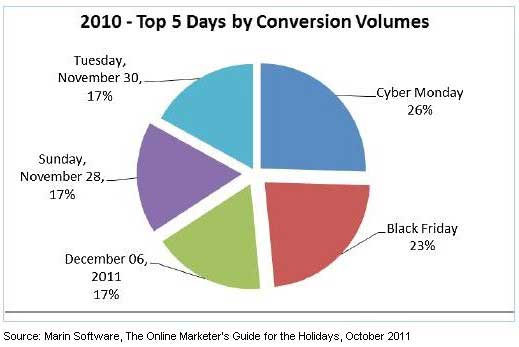 Thanksgiving Day registered the highest click-through-rate (CTR) of the entire holiday season, according to the study, signaling shoppers' engagement relatively early in the season.

Below, additional findings from Marin Software's 2011 Online Marketer's Guide for the Holidays, based on online ad data from the 2010 holiday season.

Online search volumes fluctuated during the 2010 holiday season, as data from Google Insights demonstrates. Relative to October baseline levels, search volumes rose roughly 40% in the days leading up to Dec 24, followed by a rapid decline over the next few days.

Most dramatically, November registered the greatest spikes in search volume for the entire season, up 125% from the baseline average:

Over the same period, a steady escalation in paid search spending occurred, both from increased search volumes and higher keyword prices. However, the higher costs were more than offset by strong gains in revenue: On a longitudinal or same-store-sales basis, Marin's retail customers generated 52% more revenue in 2010 over 2009 levels:

The holiday shopping season is growing larger and more important for online advertisers with each passing year. Consumers spent approximately $32.6 billion online during the 2010 holiday season, representing an increase of 12% over 2009, according to Marin Software.

Competition for e-tail dollars is hotter than ever: 73 of the top 100 e-retailers listed in the Internet Retailer Top 500 Guide offered consumers some form of free shipping on orders as of the week ended Nov 4, 2011, according to Internet Retailer. That is up from 65 retailers that offered free shipping during the same week one year earlier.

About the data: Analysis is based on data from Marin Software's online ad management platform drawn from the 2010 holiday season among over 1,000 advertisers who invest more than $2.1 billion a year on search, social and display.