More than three-quarters of US corporate marketers say they are aggressively (16%) or moderately (62%) shifting spending from traditional marketing to branded-content* marketing, according to a study by the Custom Content Council (CCC) in partnership with ContentWise.

In addition, the annual study, based on a survey of 100 US corporate marketers, found that total spending on branded content rebounded in 2011, to its highest level ever: $1,913,609 per company on average, among those surveyed.

Below, additional findings from the report titled "Spending Study: A Look at How Corporate America Invests in Branded Content," by the CCC and ContentWise. 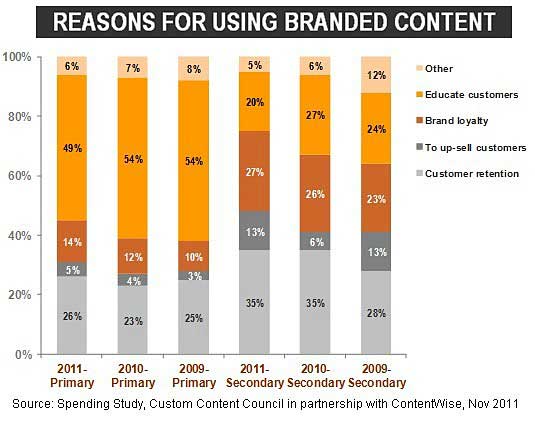 Up-selling to customers (5%) is ranked as a low priority, reinforcing the idea that marketers view branded-content initiatives as long-term investments rather than transactional ones.

Among corporate marketers, branded-content initiatives are considered more effective than other leading forms of advertising and marketing: 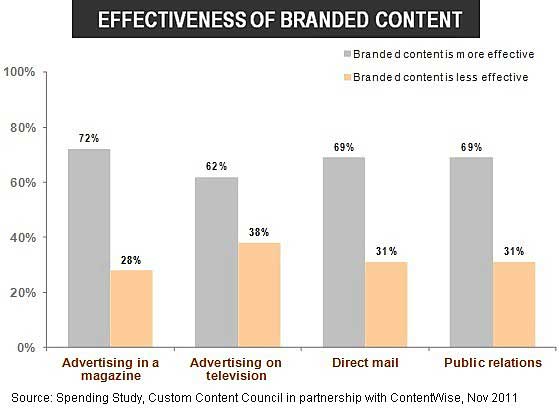 *For the survey, branded content (AKA custom media, custom content, and custom publishing) is defined as the creation and distribution of educational and or/compelling content in multiple formats to attract, educate, up-sell, and/or retain customers.

About the report: The research was conducted via online and mailed methods targeting a random sample of companies across all industries. More than five thousand invitations were distributed and roughly 100 surveys were completed in the fourth quarter of 2011. Among the responding companies were: Allstate Insurance, Booz Allen Hamilton, Cephalon, Graybar, ICF International, Sports Authority, State Farm Insurance, and the University of Maryland.