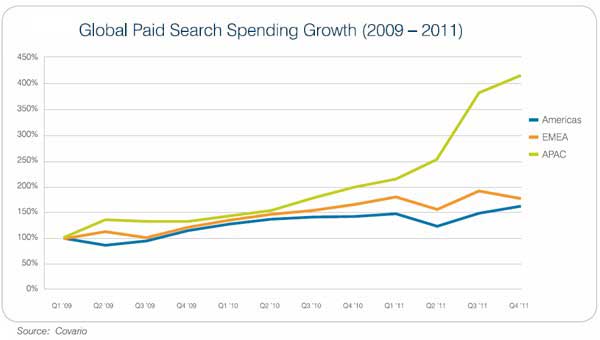 Below, additional findings from Covario's quarterly report, based on an analysis of its customers' search-spending activities across all search engines.

In fourth quarter, Google commanded 76% of the global market share, followed by Bing/Yahoo with 13% and Baidu with 9%. 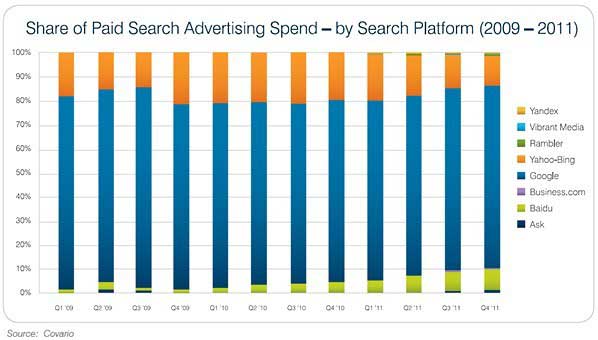 Among search platforms, Google continues to be the major beneficiary of spending growth. Ad spending among tech advertisers on Google was up 8% over 3Q11 levels, and up 27% YOY. Meanwhile, spending on Bing/Yahoo was down 1% from 3Q11 levels, and down 18% YOY.

Baidu, which commands the most market share in APAC countries, given its dominance in China, grew 19% QOQ, and 185% YOY.

In North America, fourth-quarter paid-search spending was up 11% QOQ, and up 18% from YOY.

Google accounted for roughly 76% of spending market share in the region in 2011, followed by Bing/Yahoo with 23%. 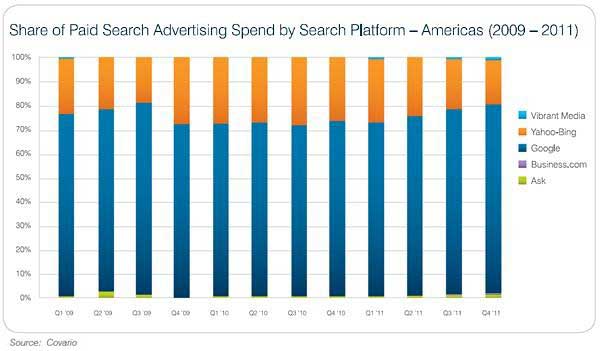 Below, the three-year trends in CPCs for the major platforms worldwide:

Among paid-search advertisers, 4Q11 was the first quarter since mid-2010 where the trend toward higher CPCs was broken. Impressions recorded only a moderate increase in volume, compared with the more dramatic increases observed for clicks and CTRs.

That trend likely due to the following factors, according to Covario:

About the data: The Covario Global Paid Search Spend Analysis is based on paid-search spending from among global high-tech and consumer-electronics advertisers, for the period 1Q09 to 4Q11.