The new study, which was initially presented at the Oct-2011 Pivot Conference held in New York City, explores the preferences social consumers across a broad range of categories.

Below, additional findings from the Pivot Conference study, conducted with Crowdtap.

Among social consumers surveyed, the iPhone is the most popular mobile platform for accessing social apps with 44% of market penetration, followed by Android with 30% and BlackBerry with 14%. 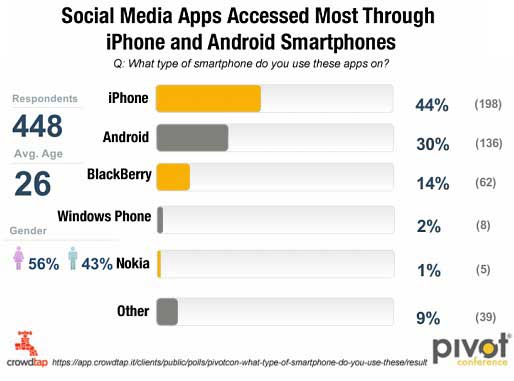 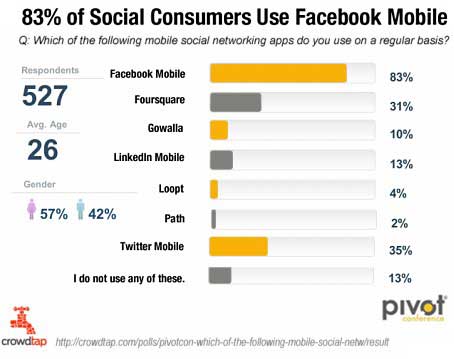 Social consumers make it clear they expect something special from brands in exchange for social interaction: 83% say they want deals and promos in exchange for engagement, 70% want socially oriented loyalty programs, 58% want access to exclusive content, and 55% want the ability to offer feedback on new and/or unreleased products.

When looking for deals, most (93%) social consumers use online deal sites, and many use several.

Among the most popular apps (as of October 2011), social consumers cited Groupon (76%) and Coupons.com ( 69%). Notably, Facebook Deals, with 56% share in October, was closed by the company in late 2011, after the survey was fielded. 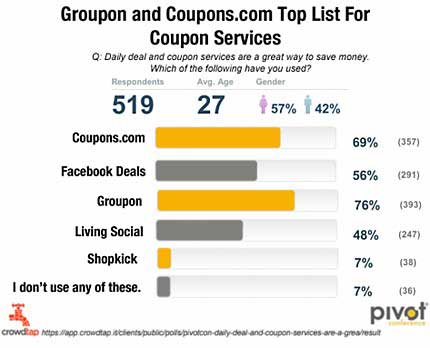 Though in fourth place as of October (with 48%), Living Social will likely claim some of the market share left by Facebook's exit.

Although Google has no presence in deals per se, when it comes to checking prices, 79% of social consumers turn to Google. Moreover, Google is even stronger than Amazon (58%), the dominant online retailer.

About the data: The Pivot Conference research is based on a survey of 500 consumers who indicated high activity in social networking. Consumers were drawn from Crowdtap online consumer panels, October 6‐13, 2011.