In 2011 the auto industry dominated made a huge comeback in Super Bowl ad spending, reaching $77.5 million, up from $32.7 million in 2010, and far surpassing all other industries, according to data from Nielsen. 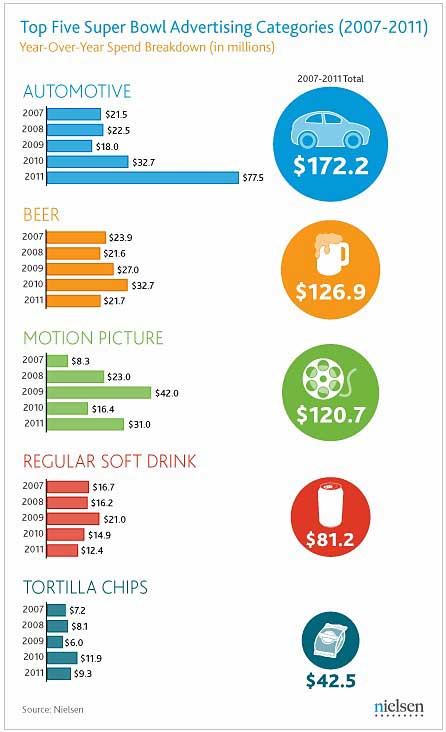 This year, Chevy is breaking ground again with the Game Time app, which will take advantage of consumers' simultaneous cross-screen behavior and reinforce branding from traditional TV advertisements.

Other carmakers, including Hyundai and Audi have their sights on Super Bowl dominance.
Hyundai plans to debut five 2012 Super Bowl game-day advertisements, while FIAT's seductive contender, which features the FIAT 500 Abarth, already has more 3.1 million views on YouTube.

Ads that aired during 2011's Super Bowl XLV were, on average, 58% more memorable than commercials airing during regular programming in the first quarter of 2011, according to Nielsen.

In addition, brand awareness for commercials airing during the Super Bowl was up to 275% higher than awareness for the same creative during regular programming.

Despite the popularity of Super Bowl ads overall, only a handful are truly memorable. What makes them so?  Forbes.com posed that question to handful of its readers, and to a panel of media and ad industry insiders.

The top-ranked ad, according to the survey, was Apple's iconic "1984" commercial, which introduced the Macintosh. Directed by Ridley Scott, the ad featured the tag line "Why 1984 Won't Be Like '1984'" referencing George Orwell’s 1949 novel 1984.

From 2002 to 2011, the Super Bowl game has generated $1.72 billion of network advertising sales from more than 125 marketers, with spending among the top five advertisers accounting for 37% of total ad revenue, or $636.6 million during the period, according to separate research from Kantar Media.

Among the top five advertisers over the period, Anheuser-Busch InBev and Pepsico lead the pack, each with 10 years of ad sponsorship, followed by General Motors, Walt Disney and Coca-Cola. 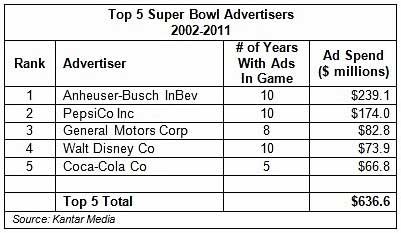 The Price of Advertising 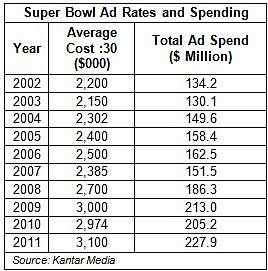 Higher pricing is expected for the 2012 game, with NBC claiming a sticker price of $3.5 million for a 30-second unit.

However, the actual amount paid by individual marketers is likely to vary, depending on where the ad runs in the game, how much commercial time is purchased, and whether the advertiser opts for a larger package that includes spots in the pregame or post-game coverage, Kantar notes.