Businesses that use primarily inbound marketing strategies for lead acquisition consistently report lower cost-per-lead (CPL) rates than those using outbound-centric strategies, according to the 2012 State of Inbound Marketing report by HubSpot. 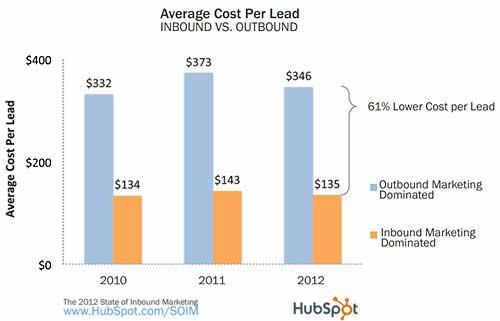 Moreover, the findings are remarkably consistent with previous years: In studies conducted by HubSpot in 2010 and 2011, inbound marketing-centric organizations registered 60% and 62% lower CPL, respectively.

"Inbound marketing" is defined by HubSpot as a set of marketing strategies and tactics focused on pulling the right prospects and customers towards a business and its offerings (i.e., programs that allow customers to find the business and offerings).

Below, additional findings from HubSpot's fourth annual 2012 State of Inbound Marketing report, based on a survey of 972 business professionals who are familiar with their company's marketing strategy. Some 72% of respondents are from B2B organizations.

Blogging, social media, and SEO (organic search) are most likely to be reported as low-cost marketing channels:

In addition to having a lower average CPL, inbound leads appear more likely to become customers.

Among a sample of 150 businesses using closed-loop marketing analytics, HubSpot analyzed the median lead-to-close rate of each business by lead source. Among those lead sources:

Social media and company blogs appear to be helping companies generate leads that result in customers:

Though B2C and B2B companies alike acquire customers via various social media channels, there is some disparity in the effectiveness of those channels, depending on business type: 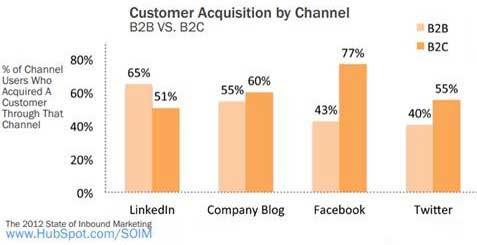 Some 40% of B2B companies report having acquired a customer via Twitter, compared with 55% of B2C companies.

However, blogging appears more effective for B2B companies: 60% report acquiring a customer via their blog, compared with 55% of B2B companies.

Asked to rate which channels have become more important to them over the past six months, marketing professionals cited the following: 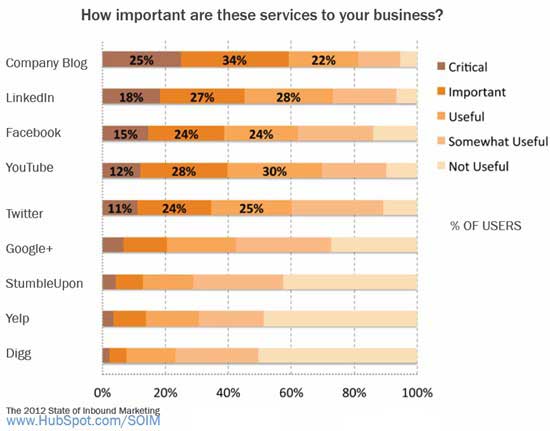 LinkedIn, YouTube, Facebook, and Twitter were considered "useful" or better by more than 60% of companies. By contrast, most users of StumbleUpon, Yelp, and Digg rated those channels "somewhat useful" or "not useful.''

About the data: Findings from the 2012 State of Inbound Marketing report are based on a January 2012 survey of 972 professionals who were familiar with their company's marketing strategy. Respondents comprised marketers, business owners, entrepreneurs, and executives at companies of various sizes and industries. Some 72% of these professionals worked in B2B companies and the range of industries varied greatly.