Businesses are ready to spend on information again, according to a new report by IBISWorld: Marketing research revenues are forecast to grow 3.1% in 2012 as corporate profits rise and businesses increase marketing budgets.

In addition to a stronger business climate, two key events—the 2012 US presidential election and the London Summer Olympic Games—are expected to drive a large portion of spending on marketing research activity during the year.

Moreover, as media consumption patterns evolve, particularly in light of social and mobile media, the growth trend is expected to continue over the next five years, during which research revenues are forecast to grow 3.0% annually on average, to $17.5 billion in 2017. 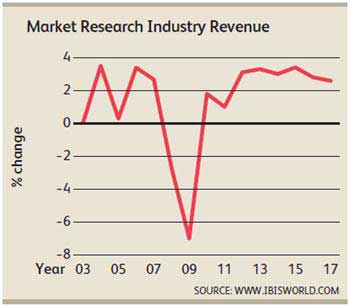 During the recession many companies slashed R&D (research and development) and marketing budgets to cut costs, reducing the need for market research. Those factors caused the market research industry's revenue to decline at an average of 0.8% annually over the previous five years, to $15.1 in 2012.

Below, other projections issued by IBISWorld.

The business information resellers industry aggregates data, which aggregates and resells research content from various sources (e.g. news publications, market research firms, and company research specialists), fell at an average annual rate of 2.6% over the previous five years, as a result of three factors, according to IBIS: 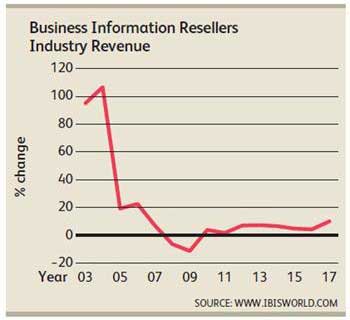 However, the industry is poised for growth in 2012, with revenue projected to increase 7.0%, to $476.0 million during the year.

With increased sales and stronger demand, the industry’s profit margin (earnings before interest and taxes) is also projected to rise from its current 7.2%, to an average of 7.9% by 2017.

About the research: All findings from the report are provided by IBISWorld Inc, March 2012.