Americans still love couponing—now a 125-year-old tradition in the US: Fully 70% of surveyed women say saving money with coupons is as American as apple pie, according to a survey conducted by Valpak.

Moreover, 49% of women say if they don't have a coupon in hand, they would not buy dinner out; also, 33% wouldn't have their carpets cleaned, and 32% wouldn't buy a gallon of milk, the study found.

Below, other findings from Valpak's 125th Birthday of the Coupons Survey of female consumers in the US.

Results were also broken out by political party affiliation: Republicans were slightly more likely than Democrats to view couponing as American as apple pie (78.2% vs. 70.7%): 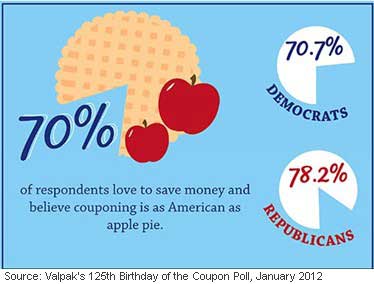 Regardless of party lines, nearly 70% of women reported they "love saving money and getting great discounts," with many saying the coupon craze is trendy and more socially acceptable among their peers.

Americans Use Both Paper and Digital

More than eight in ten women (84%) say they use coupons received via mail, such as Valpak, and those found in newspapers.

However, digital couponing is gaining momentum; among surveyed women:

Nearly six in ten women (58%) say they have increased their coupon habits over the past few years.

Democrats were slightly more likely than Republican to say they had increased couponing over the past several years (63% vs. 57%). 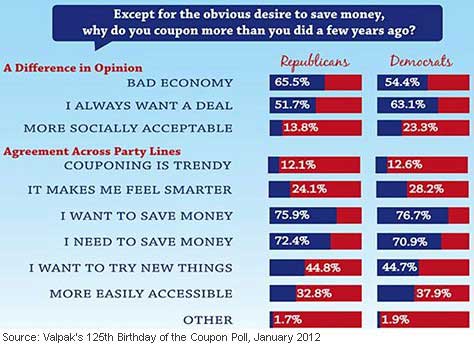 Asked how they feel about a man's using a coupon on a date or special occasion, 60% of women said "That’s my kind of man." 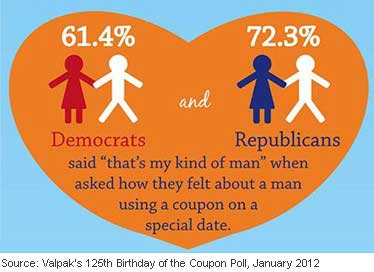 Only 9% of Republicans and Democrats were opposed to a man's using coupons on a date.

Some key findings among surveyed women:

The nation's first coupon was issued in Atlanta, Georgia, in 1887 by a businessman offering discounts on his new product—samples of cola—according to Valpak.