Email remains a powerful way to connect with customers and influence their buying decisions: 66% of online Americans say they have made a purchase as a result of an email from a brand, more than three times the percentage of people who have purchased in response to a message delivered via Facebook (20%) or text message (16%), according to a study by Exact Target.

Direct mail is also a key tool for motivating consumers to buy: 65% of surveyed online Americans say they have made a purchase in response to message received via direct mail. By contrast, mobile apps (10%) and social channels such as Twitter (6%) and LinkedIn (4%) are less likely to influence consumers' buying decisions.

Brand messages via social channels tend to sway younger generations: Teens (age 15-17) are the most likely to be influenced by brand messages delivered via Facebook (32%) and Twitter (16%) when making purchases. 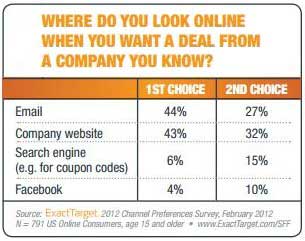 Email is preferred even among teens (66%) over all other direct channels for permission-based marketing communications.

Preferences for permission-based communications haven't changed much over the past few years. 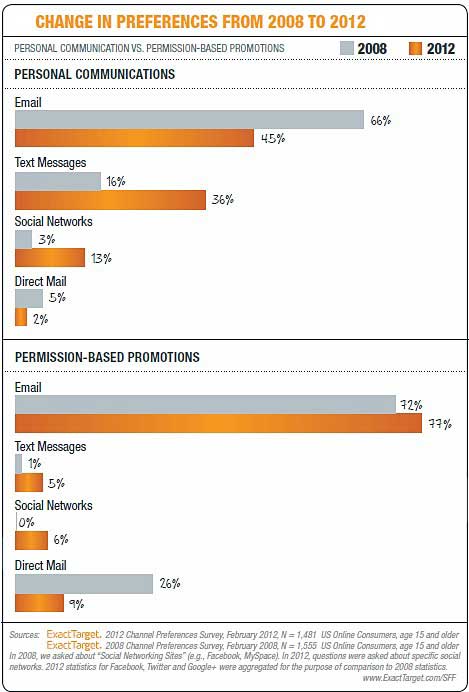 However, consumers' preferences for personal communications have shifted dramatically, in favor of social networks and text messaging:

Such shifts in preferences are also reflected in the way people, particularly younger generations, share content with friends and family.

Email and Facebook are the channels most frequently used among online consumers:

Among online consumers, email is also favored for resolving customer service issues, and for financial and travel alerts: