Tablets are fast becoming the mobile shopping device of choice among consumers: 64% of tablet owners say they have made at least one purchase via their device in the previous six months, compared with 48% of smartphone owners who say the same, according to a new survey by Local Corporation and the e-tailing group.

Moreover, tablet owners are nearly twice as likely as smartphone owners to have made six or more purchases via their device over the previous six months (24% vs. 13%). 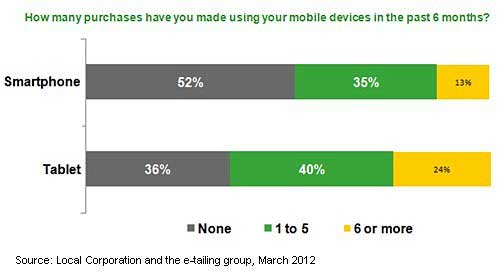 Below, additional findings from a survey of 1,000 consumers who own a smartphone, of which 54% also own a tablet device, conducted by the e-tailing group on behalf of Local Corporation.

Shopping-Related Research on the Rise

Consumers are also spending more time conducting pre-purchase research: On average, mobile device owners report spending 42% more time than before researching products and services via PC or laptop, while 34% are doing so via smartphone and 28% are researching more via tablet.

Tablet owners user their devices at various stages of the shopping process, particularly during the research phase: 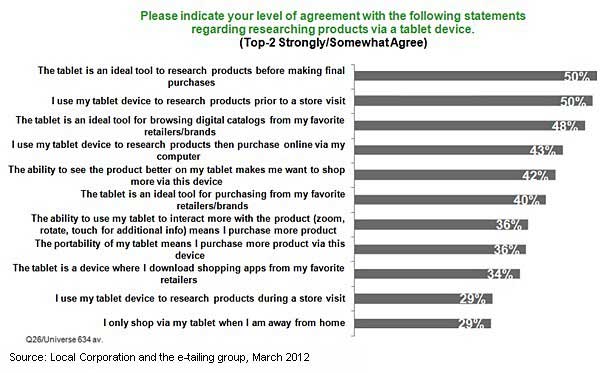 More than one-third (36%) of tablet owners cite various features of the tablet (zoom, rotate, etc.) as a key driver of purchasing more via tablet, while the same proportion (36%) cite portability as a key driver.

One-third (34%) of tablet owners download and use retailers' shopping apps on their tablet.

Mobile device owners also use their smartphones before they head out to a physical store:

Even while shopping in stores, two-thirds of mobile device owners use at least one device to research and transact, and 28% use two devices at a time.

Ratings and Reviews Most Influential

Among mobile device owners, ratings and reviews (41%) and search results listings (37%) top the list of resources that most influence shoppers' destinations, followed by display advertising (20%) and Facebook ads (14%).

About the data: Findings are based on a survey of 1,026 consumers who owned a smartphone (49% male/51% female) in March 2012. Respondents were qualified as having shopped online four or more times in the previous year and typically spending $250+ annually. Some 54% of respondents owned a tablet device.