Traffic to Instagram's website had already been increasing steadily over the previous 24-week period, reaching 3.8 million visits as of April 7, over 55 times the 68,800 visits recorded six months earlier (October 22, 2012), according to a report by Experian Hitwise.

Although most consumer activity with Instragram occurs via the company's mobile apps, the website provides links to the Apple App Store and Google Play, as well as some account management tools.

So, growth in traffic to the Instagram site is a signal of increased consumer interest.

Some media insiders have suggested that Facebook's new acquisition is a move to attract younger, mobile-savvy audiences.

Instagram's audience is relatively young: 52.44% of the visitors to the Instagram website in the four rolling weeks ended April 7 were between the ages of 18 and 34, whereas Facebook audience skew slightly older.*

Those differences may offer some opportunity for Facebook to bolster its younger user segments.

Among those clicks referred by the social networking category, 25.02% were from new visitors, likely interested in learning more about Instagram after seeing photos within the social feeds of friends.

On April 3, 2012, there was huge excitement around the long-awaited launch of the Instagram app for Android phones, which became available via Google Play, Google's digital media store.

The new Instagram/Android OS app reached over 1 million downloads within the first 24 hours of availability, according to Hitwise. Visits to the Instagram website increased 59% over the previous week and Google Play ranked sixth among the downstream websites visited immediately after the Instagram website. 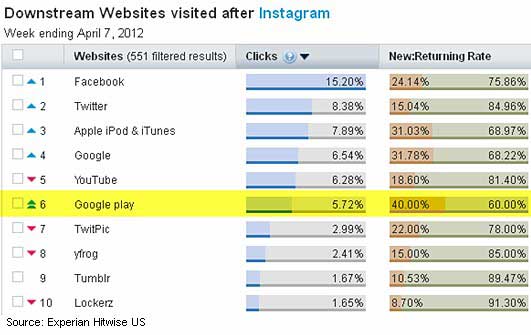 About the study: All findings are from Experian Hitwise US for the six months ended April 7, 2012. The data does not include mobile traffic.