Advertisers are warming to Facebook's new social ad formats: Over the past 12 months, the proportion of Facebook ad budgets allocated to "social ads" has increased fourfold, from 5% in March 2011, to 23% in March 2012, according to a report from Marin Software.

Moreover, social ads are expected to account for 50% of Facebook ad budgets, on average, by the end of 2012, the study reports.

Below, other findings from Marin Software.

The average performance of Facebook ads vary worldwide, as do the costs: 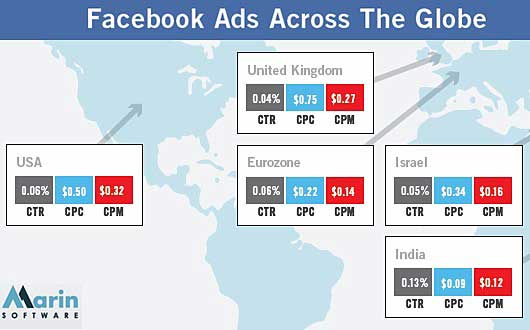 In the Eurozone, average CTR is similar to the US rate, but the cost of ads is lower.

"Based on our data, the answer to both of these questions is an emphatic 'Yes.' In the last year advertisers have directed more budgets to social ads and Facebook users have responded by clicking more often. This trend is not only positive for Facebook from a revenue standpoint, but also provides important validation of the opportunity advertisers have to drive revenues from word of mouth marketing efforts."

About the data: Analysis is based on data from Marin Software's online ad management platform drawn from 2.5 billion Facebook ad impressions, March 2011 to March 2012.