With more than 180 million US Internet users watching some 36.6 billion online content videos in May 2012, video ads posted another month of record-breaking gains, surpassing the 10-billion mark for the first time on record, according to data from the comScore Video Metrix service.

Google Sites, driven primarily by video viewing at YouTube, was the top video content property in May, attracting 151.7 million unique viewers, up from 147.2 million a year earlier. Yahoo Sites was second with 57.8 million viewers, followed by VEVO with 48.3 million, Microsoft Sites with 44.4 million, and Facebook with 44.3 million, down from 48.2 million in May 2011. 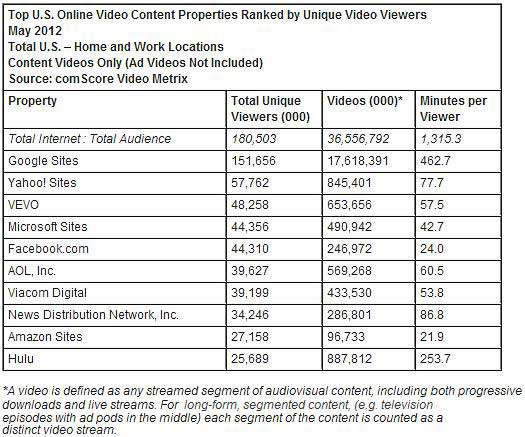 Viewers engaged in nearly 36.6 billion video content views during the month, with Google Sites generating the highest number at 17.6 billion, followed by Hulu with 888 million and Yahoo Sites with 845 million.

Overall, 84.5% of the US Internet audience watched online video content during the month for an average of 21.9 hours, up from 15.9 hours per viewer a year earlier. Google Sites (7.7 hours) and Hulu (4.2 hours) earned the highest average engagement among the top 10 properties.

Among some 10 billion video ads viewed in May (more than double the 4.6 billion in May 2011),  Hulu generated the highest number of video ad impressions at more than 1.6 billion, followed by Google Sites (1.4 billion), BrightRoll Video Network (1.1 billion), Adap.tv (966 million), and TubeMogul Video Ad Platform (897 million). 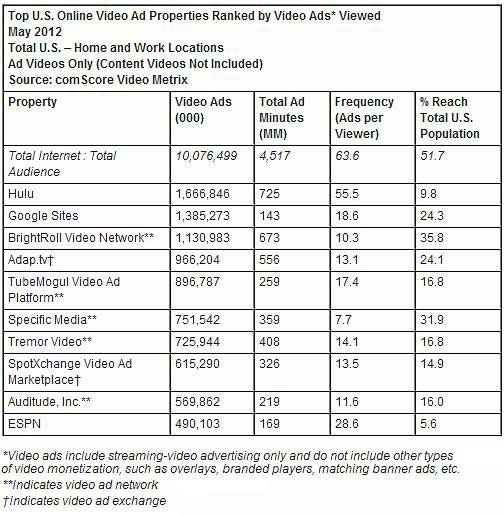 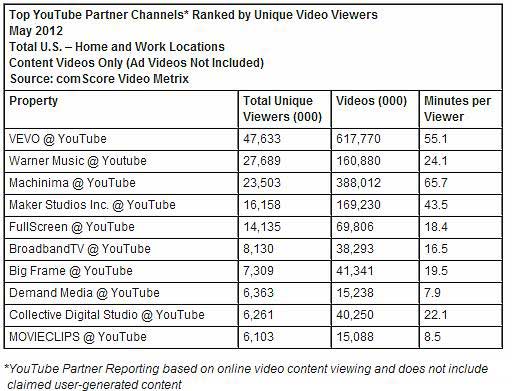 VEVO streamed the most videos (618 million), followed by Machinima (388 million).