YouTube Drives Video Viewing to Record High in May

Google Sites, driven primarily by video viewing at YouTube.com, comprised the top-ranked online video content property in May 2011, delivering some 2.1 billion viewing sessions and the highest amount of time spent per viewer (311 minutes on average), crossing the 5-hour mark for the first time, according to data from the comScore Video Metrix.

Google sites attracted 147.2 million unique viewers in May, followed by VEVO with 60.4 million and Yahoo Sites with 55.5 million. Facebook was fourth with 48.2 million viewers, followed by fifth-ranked Viacom Digital with 46.5 million. 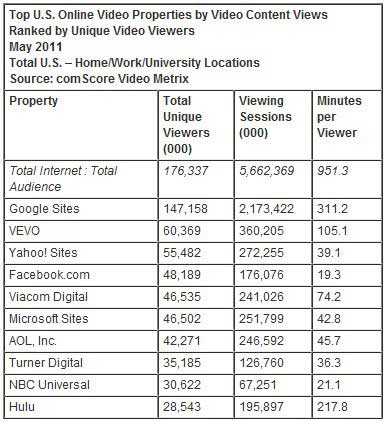 Overall, a total of 176.3 million Internet users (roughly 83.3% of the US Internet audience) watched online video content in May for an average of 15.9 hours per viewer.

Viewers engaged in more than 5.6 billion viewing sessions during the month. Roughly 38.3% of those sessions (2.1 billion) were delivered via Google Sites.

The average duration of online content in May was 5.2 minutes. 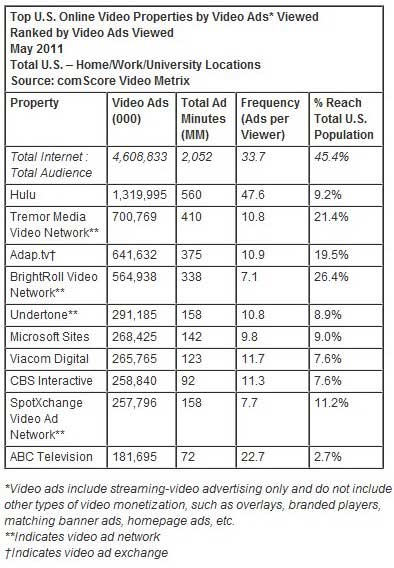 Overall, video ads reached 45% of the total US population an average of 34 times in May. The average duration of online video ads was 0.4 minutes.

Ranked by potential reach, Tremor Media was the nation's top video ad network, with a potential reach of 47.1% of the viewing audience, followed by BrightRoll Video Network at 42.1% and Break Media at 40.4%.

Video ads accounted for 12.6 of all videos viewed and 1.2% of all minutes spent viewing video online.