Mobile devices have a strong hold on today's consumers, so much so that some users are becoming totally mobile dependent, whether at home or on the go: Half of smartphone and tablet users (51.1%) say they now check their email using only their mobile device, according to a recent survey conducted by Prosper Mobile Insights.

Overall, 7 in 10 smartphone or tablet users (69.3%) conduct at least one Web-based activity solely with their device: 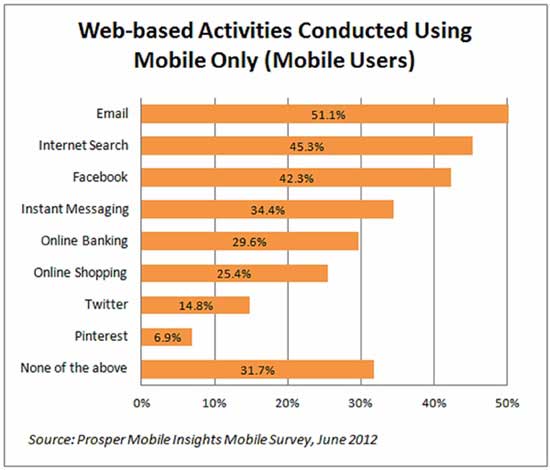 "With consumers opting for mobile devices instead of computers for many online activities, marketers need to hone in on their targets in the traditional as well as the mobile ad space," said Pam Goodfellow, consumer insights director at BIGinsight.

As to which types of ads smartphone and tablet users are most receptive to (regularly pay attention to)...

Banner ads (8.2%) aren't far behind in gaining regular attention, but pop-up ads (4.5%) appear to be the least liked type of mobile solicitation.

Furthermore, 42.9% say they are more likely to focus on ads in video format on a Smartphone or tablet, and the top reason for such special consideration is simply that video ads are more likely to grab the mobile user's attention: 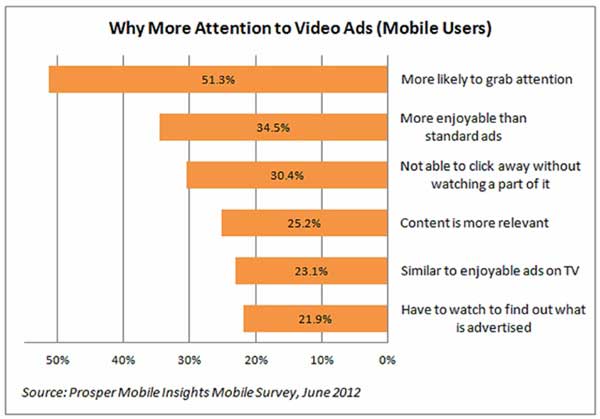 Advertisers should be careful when evaluating the amount of time a consumer spends on an ad, since 30.4% say they pay more attention to video ads because they are not allowed to click away from them, according to BIGinsight.

Overall, for any type of ad on a mobile device, the best plan of action for marketers is to deliver ads to the right audience, the study suggests:

About the data: The BIGinsight June mobile survey included 331 smartphone and tablet users from the SSI Panel (Survey Sampling International and Opinionology) who completed the survey on their devices. The survey was collected from 6/19/12 to 6/22/12.

Continue reading "7 in 10 Use Only Mobile for at Least One Web-Based Activity" ... Read the full article