Both Google Android and Apple continued to increase their share of US smartphone subscribers in the US: Android reached nearly 51%, while Apple captured 32%, according to data from the comScore MobiLens service for the three-month period ended May 2012.

Nearly 75% of US mobile subscribers used text messaging--the most popular type of content use--on their mobile device (not just smartphones). 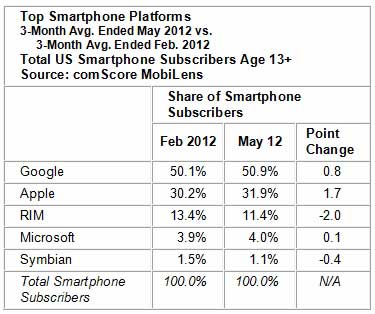 Google Android was the top smartphone platform with 50.9% market share (up 0.8 percentage points).

Five years after the release of the first iPhone, Apple's share of the smartphone market reached 31.9% in May (up 1.7 percentage points).

In May, 74.8% of US mobile subscribers used text messaging on their mobile device. 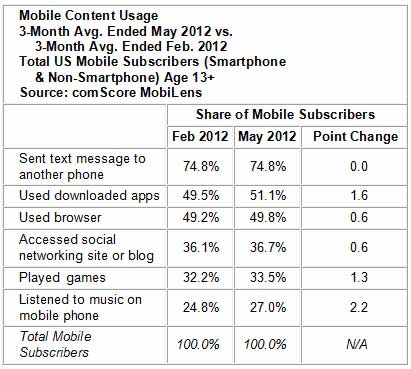 For the three-month average period ending in May, 234 million Americans age 13 and older used mobile devices.

Device manufacturer Samsung was the top OEM with 25.7% of US mobile subscribers (up 0.1 percentage points), followed by LG with 19.1% share. 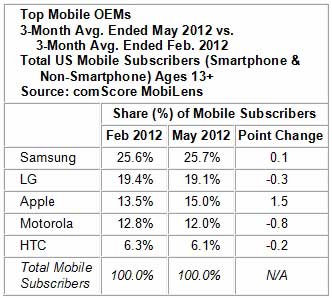 Apple continued to increase its share in the OEM market, ranking third with 15.0% (up 1.5 percentage points), followed by Motorola with 12.0% and HTC with 6.1%.