When a Brand Tweets, Does Anybody Hear?

Tweets that contain fewer than 100 characters receive 17% higher engagement than longer tweets, according to a Buddy Media study titled Strategies for Effective Tweeting: A Statistical Review.

Between December 11, 2011 and February 23, 2012, Buddy Media analyzed user engagement on more than 320 Twitter handles of the world's biggest brands to determine what works and what doesn't.

"Twitter is an integral part of every brand's social marketing strategy, so we took a deep dive to see how they can increase engagement within their communities," said Tami Dalley, VP of analytics and insights at Buddy Media.

Below, findings from Strategies for Effective Tweeting: A Statistical Review.

Time of Day, Day of Week

When brands Tweet during "busy hours" (8 AM to 7 PM), they receive 30% higher engagement than Tweets that fall during "non-busy hours" (8 PM to 7 AM).

That differs from the findings in Buddy Media's Statistics for Effective Facebook Wall Posts report, which found that Facebook updates during non-busy hours receive higher levels of engagement.

Twitter engagement rates for brands are 17% higher on Saturday and Sunday compared with the weekday average, but only 19% of brands tweet on weekends. Engagement with brands' tweets is lowest on Wednesdays and Thursdays. 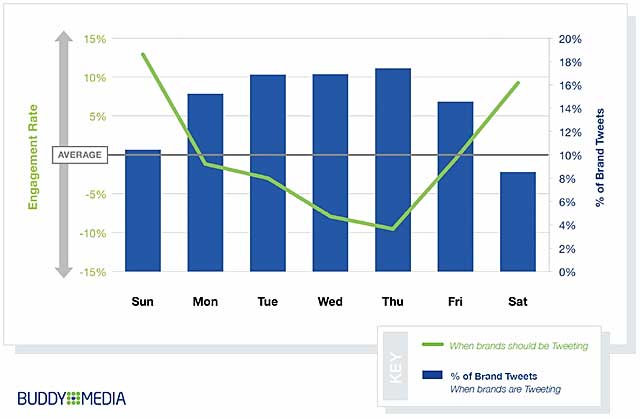 However, there can be significant differences among industries, several of which are highlighted in the report.

Based on the findings of the study, Buddy Media has drafted a "cheat sheet" summarizing best-practices for effective tweeting: 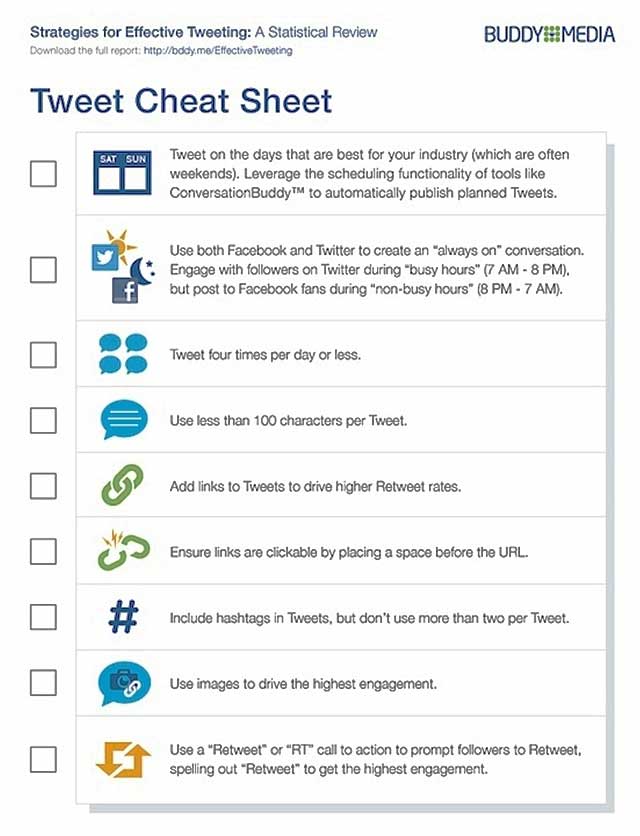